Believe it or not, I hate being the bearer of bad tidings (to those subjected to public schools, that means I don't like bringing bad news all the time). I'd much rather be the guy that comes in with a big smile and says, "Guess what, everyone; happy days are here again!"  Unfortunately, that would be a lie, and a dangerous one.Besides, there are plenty of people already doing that. Truth is, the world has changed radically within the past few years, and the bad news is ramping up like a brakeless steamroller running down the mountain toward a ski lodge during the New Year's Eve party. And like the party, most of the folks inside are too drunk or wrapped up in who they're gaming to take a look out the window, even when someone is yelling, "There's a steam-roller coming at us, run for your lives!"

I've been trying to get people's attention for years; to warn them of what could be (there's less mystery now if you pay attention) coming, but most just laugh or shrug it off. It's not as though I'm speaking down from on high, with all the physical and economic security one could desire. In fact, I'm just the depth of a shadow away from complete poverty, but I don't consider myself poor. God has blessed me so much more than I deserve, and He doles those blessings out daily in one form or another. So, I feel my obligation and duty is to serve, and to try and tell others of coming danger and Judgment. Like others who try to ring the warning bell, it can be lonely and frustrating to realize most people - including those you care about - don't believe you and couldn't care less.

While we're on the topic...  Since we're dwelling on bad news here (as opposed to..??), you may as well join me for a run-down of just a couple of examples of the latest social detritus, and see which ones you can check off your "already knew that" list. 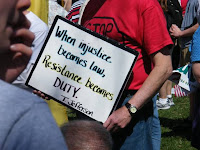 We learned from that right-wing (not) news organ Reuters that the Obama malAdministration has a secret panel in the National Security Council that conducts virtual 'Star Chamber' hearings to decide which American citizens to put on a literal 'hit' list. The most prominent victim so far to make this extinguished list is US-born al-Qaeda mastermind Anwar al-Awlaki.  I'm torn on this, because on the one hand I believe our government shouldn't be targeting us for elimination for political reasons. But on the other hand, I believe that the government wields the 'sword of justice' and has a responsibility to punish murderers and those complicit in such crimes. For me, it comes down to the morality of the government wielding that 'sword', and I don't think the present one is the right one to do so. Besides, they claim to "follow international law" while prosecuting their list. So that means it is internationally acceptable to knock off one's citizens? Globalism rules! And that's a scary thought.

We're discovering more about the American educational system that has been systematically poisoning minds for nearly a century.  The mechanism for this dissemination of anti-American values is locked up in the teachers' union, but at its core is the corrupting philosophy of socialists (OK; let's call them what they actually are...communists).  While many are frothing-at-the-mouth commies, most are simply ignorant of the goals and background of the educational elites who influence their own education, and in turn influence their students. As computer geeks say, garbage in, garbage out.

Meanwhile, the "totally (non-)spontaneous" mobs of the ignorant, indolent, insolent and unwashed continue their live-out in the streets of the Big Apple, Washington DC, and other cities.  And although they would probably count me among the "99%" (actually, I'm solidly in the 43%) I think these self-absorbed smellitists are woefully - and purposely - misled.

At the core of the chaos is a statist, collectivist, communist ideology, conveniently wrapped up in phony feel-goodism and globaloneyism. What these overly-impressionable Young Turks don't realize is that they are being used (as in useful idiots) as cannon fodder. 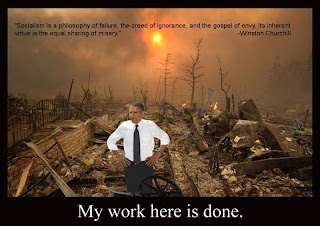 The financial elites who bankroll these events, the planners who formulate and instigate them, and the political elites who set the stage are all using these gullible meatheads (or veg-heads, as the case may be) to provoke the authorities into an action that will ignite a maelstrom of violence, which in turn would cause the authorities to stomp them into submission, which would fan the flames of revolution, which would help collapse the system, which would provide the excuse for the elites to roll in and crush the revolt (which they financially backed in the first place) and restore 'peace'. (Yes, it's a massive run-on sentence, but I'm trying to make a point.)

This would put them in position to create a new system, the same as the old system that has caused the misery and deaths of millions of people everywhere it is tried. And if you think I'm crazy to talk about the deaths of millions, keep in mind that this brain-trust firmly believes in massive population control, just so long as it happens to any other portion of the population except their own. They have admitted and discussed as much, it's just that so few are listening, and fewer are willing to believe it.

We also learned that the Boy Scouts have ties to the Muslim Brotherhood (Say it isn't so!). The fact is that radical Islamicists have - much like the communists/progressives - infiltrated virtually every aspect of society; every political party and institution, nearly every media outlet, university, union, and government agency. Since they, like the communists, understand that the simplest way to conquer a nation or culture is to capture or influence its children, it shouldn't come as a surprise that these malevolencies would worm their way into organizations like the Scouts that center around the young.  This includes the churches of America as well.  But that is a tale for another time.
Posted by Chuck Teal at 10:29 PM