Happy Labor Day! Yes; I'm being sarcastic. As President Obama spends the day pumping up union workers in Detroit with the illusion that his job creation plans are nothing more than strategies for failure, Americans celebrate a day that salutes the very unions which have helped to humble us and drive us into depression, psychologically and economically. And while I too appreciate a day off from the grindstone, I cannot help feeling betrayed yet again by people with fat wallets and fatter egos who gather together in closed rooms and determine what is best for everyone else, even knowing that what they plan is just the opposite. In one sense, we are all celebrating the demise of our liberty, but few seem to notice, and even fewer seem to even care. We've been conned on a grand scale by the collatoration of unions and big government (even while that government works with big business on the other side), and they've convinced us to love it so much we kick back and party hardy. 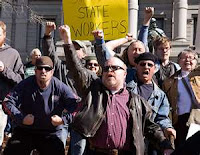 While unions were begun with the best of intentions - at least by the rank-and-file, the end game of organized labor since the beginning has been the ruthless accumulation of power. And while union workers by and large have made out very well, the cost has been an exodus of millions of American jobs out to other countries [According to a 2004 Cornell University report, 39% of the jobs lost overseas were union jobs. Congrats, union bosses!]. The intransegence of the unions - always seeking more benefits and protection for workers without considering the long-term effects of crippling competitiveness and protecting bad workers - has had the inevitable effect of shooting the workers themselves in both feet. After all, a golden contract is no good if there is no production line to support it.  And while this pathetic short-sightedness is bad enough among industries, it is downright deplorable among civil servants, who seem to have forgotten the "servant" part of their job description.

With cities' and states' governments threatening to save themselves by throwing the most essential workers (police, firefighters, water, sanitation and others) under the collectivist bus, it is truly ironic that the police, who are the hammer that pounds the populace on the anvil of government regulations, is so often first on the chopping block. Of course, as the enforcement role is assumed by a generation not versed in rights and responsibilities, the incidence of storm-trooper personality types is increasing exponentially, so we might be able to spare a few of those people, for the general welfare of citizens, if not economic stability. 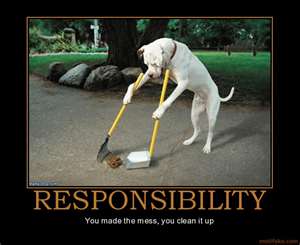 Who's in charge?  When I was growing up, there were rules that most people took for granted. Marriage meant one man and one woman. You could do pretty much what you wanted - especially with your own property - as long as it didn't affect someone else in a substantially negative way (which meant you could fly the American flag from your front porch with nary a whimper from the neighbors). Children, while not as pampered as they often are now, were loved, and the children generally knew it because they saw both parents every day.  If need be, you could defend yourself and your property without fear of persecution (yes, I meant persecution,in the sense of a common understanding that person and property are sacrosanct). Ideally (if not practically) you didn't lie to people, you didn't cheat, you didn't steal, you didn't murder, and you respected the God of the Bible and His Church.  Leaders were expected to set the example for ethics and personal behavior. Of course, almost everyone screwed up at least one of those at some point in their lives (and some more than others), but you assumed everyone at least knew the rules and would be held to them. They were the  standards you could point to and defend the social fabric with.

My, how far we have fallen. It's getting increasingly difficult to find more than a relative handful of people who even recognize those social boundaries anymore. And with each passing generation, our hold on the wholesome gets more tenuous.  Holy matrimony is being trampled in the name of political correctness as as another direct affront to God. Private property is being swallowed up by the State, and privacy is all but lost to an ever-intrusive government and corporate behemoth that respects nothing but its own power. Children are being pampered to spiritual death; provided with more wants than they can handle responsibly, yet their real needs (the actual presence and involvment of loving parents [plural] and a quality education that reinforces both rights and responsibilities) are relegated to the not-so-tender mercies of the daycare provider, the sickening agenda of the education establishment and the self-centered goals of the teachers' union. Lying, cheating and stealing are not only acceptable but fashionable by many social institutions and groups including the halls of academe and government. Murder has even become legal, as long as the victims are the absolutely most defenseless segments of society. And as predicted, one of the latest pushes on the homosexual front is an attempt to normalize pedophelia via the faux-science of the psychological' community'.

As for leaders...where do I begin?  After thirty-plus years as a Republican, I switched a couple of years ago to the Conservative party (here in New York State), simply to avoid the ambiguity of where I stand, so I don't think it would be fair to lable me as a party hack, although the GOP still has a few good minds in its ranks; however, those folks too often get pushed aside by the party leadership. As someone else once said, "I didn't leave the party, the party left me." And to be honest, I've come to the point where I reluctantly agree that both parties, at the 'establishment' level, are simply two wings of the same agenda.

Then there is the media, some members of which are so far in the bag for the Left they no longer even register on the 'sense' scale, and whose major goal seems to be as water-carriers for the radical Demoncrats of this malAdministration.

Flipping to the other side of the media coin; Glenn Beck's Restoring Courage rally in Jerusalem was held a couple of weeks ago without any of the incidents predicted by his critics who were trying to dissuade him and scare attendees away. It was a series of events intended to reassure Israelis in particular and Jews in general that there are many people around the world who do not agree with the emnity displayed by so many nations, organizations and individuals, including our own current malAdministration.

In addition to his passionate defense of Israel's right to exist, Glenn called for a new paradigm - one that defines human rights but also restores the responsibilities that are the necessary counterbalance to those rights - is a refreshing change from the 'gimme' brand of faux rights put forth by the Left. Besides, if the Left (or the extreme Right) ever achieves total global domination, there will be no such thing as rights for anyone except the most powerful elites. It has become a trusim that our most dangerous enemy is the enemy within. 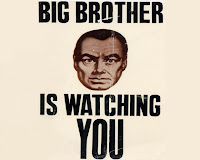 Just another day of "fundamental transformation."  The Obama malAdministration continues - in line with the sickening agenda of the global elites - its relentless persuit of "nudging" us into total Mao-style communism. From continuous little insults (such as having China provide a 30-foot-tall statue of Martin Luther King and a 2,050 ft bridge spanning San Francisco Bay), to increasing pressure against our national defense, China is demonstrating that they are not content to merely sit back and fix their own country; they want to 'fix' ours and the rest of the world as well, and they are proceding headlong on that course.  Now, imagine how well that will go for all of us once they totally suceed.
Posted by Chuck Teal at 1:08 PM