Have you ever had one of those weeks in which it seems almost everyone around you is pushing your buttons, seemingly trying to provoke you into doing something you'll seriously regret? Yeah; one of those.

I'm here to tell you, it isn't just you. Globally, there is a wave of animus that is engulfing millions of people. And it is neither accidental nor coincidental.

In London and other European cities mobs have increasingly devolved from ideological and social misfits to racial tribalism. As I noted in the previous posting, it's also happening here. As in other US cases, officials are carefully walking a "see no evil" line, in which any hint of racism - if it is (obviously) black-on-white or Muslim-on-Christian - is automatically denied by politicians who are equally quick to pin the blame on anyone other than the actual culprits. 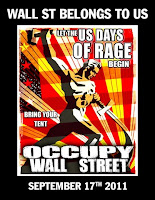 Earlier this year, I posted Glenn Beck's discovery of an active plot by SEIU organizer Steven Lerner to begin an assault against the banking industry by encouraging millions of people to purposely default on their mortgage payments, with the aim of causing the entire economic system to collapse. The apparent goal was to have the resulting crash to cause widespread riots and violence to ripple across the country. Taken to its logical conclusion, that atmosphere of chaos would be just the crisis needed to declare a national emergency that would necessitate the nullification of our constitutional rights. Because of Beck's public warning, the effort didn't really get off the ground at that time, although more than 400 showed up to annoy people at JP Morgan Chase's annual stockholder meeting in Ohio.

Now, they're back, and bolder than ever. Capitalizing (if I may use that term) on the massed protests in Wisconsin and other areas, the mobs are set to occupy Wall Street itself in what organizers are calling the Days of Rage, with the goal of creating “a week of civil disobedience, direct action all over the city:” Since this action could be an impediment to the conduct of big business, maybe even Mayor Bloomberg will find a backbone and impede them in return.

In addition to the larger efforts at mobocracy, smaller but just as sanctimonious groups including the AFL-CIO (isn't it curious; the union labels are everywhere) are once again protesting individual corporate officers at their homes.

When union thugs end up destroying businesses or driving them away, you can thank your local union member for his support (union dues, protests, intimidation, etc.) in causing even more job losses. And in case you don't work at a big corporation and don't care, keep this in mind: every large corporation buys goods and services from hundreds of small businesses - everything from the local restaurants and pizza parlors patronized by the workers and their families, to the office supply companies, security firms, gas stations, corner stores and markets, hardware stores, beauty- and barber-shops, and many others.

If there is anything to be learned from all this, it is simply that...if people really are out to get you, you aren't schizophrenic. And ironically, it seems that the only folks more afraid of violence in the streets are the people at the top of government. The irony isn't that they are afraid, because they hold the military, police, judicial and political power; it is that they are afraid all that power won't be enough to keep them eternally in those positions of power. 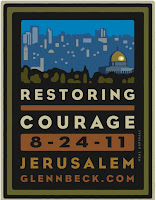 Stand, or get knocked down. This week may become one of the most memorable in recent years, and it could go either way; to glory or infamy. Glenn Beck is holding his Restoring Courage event. Actually, it is a series of events taking place over four days in Israel.
If the impending fate of Israel doesn't interest you, you aren't nearly as alone as the citizens of that tiny nation. It is literally surrounded by enemies determined not to merely beat them, but to utterly destroy them - every man, woman and child, and not just in Israel. Muslim clerics (remember that Islam is equally a religious and political system). Millions of Europeans are revisiting their historic disdain for Jews, and many Americans are being turned against them by our own current government (which also happens to be recalling many of the policies, activities and goals of Nazi Germany and the Soviet Union). I have even heard Christians argue that Israel deserves no special attention from us, in the sense of upholding our historic defense agreements with them. Personally, I don't believe my Christian faith tells me that abandoning our honor or compassion is the right way to go. But then, to each their own interpretation of scripture, I guess.

If you are one of those people who doesn't believe we should stand up for Israel when they need us most (by the way, they haven't asked for help yet; what they are looking for is someone that will at least speak on their behalf -- in other words, a friend), then perhaps it is time to recall the words of Pastor Martin Niemoller. The exact text of what Martin Niemoller said, and which appears in the Congressional Record, October 14, 1968, page 31636 is:

You can follow Glenn Beck as he tries to restore the compassion and courage of the American people (you didn't really think the Israelis needed to be reminded of courage, did you?) by signing on to his fledgling internet TV channel which officially launches September 12. You can subscribe to GBTV without contracts for $4.99 per month (until launch day, after which the price goes up to 9.95 per month unless you're already locked in). Having seen a number of productions already presented, I can say it is worth the cost. However,for those who just can't go that step, it was just announced that TBN will carry at least one event (Sunday) so far.

As I've stated before, I don't like to put anyone on a pedestal because we're all flawed. But Beck has done what no one else with his ever-expanding media footprint has been willing to do; put everything - including his own money and his reputation - on the line to put the evidence, the truth as he sees it, and a call for a return to moral principles, and a return to God as revealed in the Bible. Many of those who criticize Beck have either never actually listened to him - other than perhaps a selected sound-bite by other critics - or they judge him purely on the rants of those critics. You don't have to agree with him on everything (I don't), but if you listen to what he presents; the evidence and his interpretations thereof you may tend to consider him worth listening to. The truth is that we've been lied to by virtually everyone, and he's trying to discover the truth, and get it out there for the rest of us to see. And Beck sees God as the ultimate Truth; as do I.

You don't have to get all religious to understand - with a little serious study - that the Bible actually is the essential handbook for the human race. It uses history to illustrate how people get off the track, and that common sense, integrity, morality, fairness, honesty, love, and compassion are timeless principles. If you're willing to believe you aren't the center of the universe, it also shows that there actually is a Being that created and cares about us; and He provided everything we need - eternally - if we're only willing to accept it. But unlike certain other faiths in which your only choice is submit or die, the Bible shows that the God it describes is a God willing to give you a choice to do it your way and suffer the eventual consequences, or do it His way and reap rewards beyond your comprehension.
Posted by Chuck Teal at 11:09 PM