A week for the history books 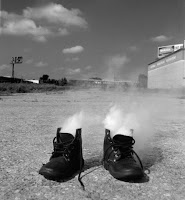 Well, I'm still here, and - surprise! - so is everyone I know (although I haven't heard from a couple of friends lately...hmmm.)  So, I either missed the Rapture that was predicted for last Saturday by pastor and Christian radio magnate Harold Camping, or I just don't know anyone who is saved by the sacrificial death and  Resurrection of Christ Jesus.

Camping had predicted the Rapture would occur at precisely 6 pm (somewhere?) on Saturday. When the prediction failed to materialize (or Christians failed to dematerialize), the results were even more predictable. One can only wonder how many lives were inadvertantly (or inadvisedly) made a shambles when the embarrassment and shame of realization took hold.

The problem with his prediction, and with all similar predictions, is that it not only serves to further alienate people who may have been on the edge of believing the gospel, it also gives ammunition (blanks, though they may be) to the skeptics and enemies of God.  If that weren't bad enough, in many instances it pushes away those who believed the preacher's prediction more than the truth of the Bible - some of whom spent their life savings and gave away everything they had in anticipation of the singular event that all real Christians look forward to...but are not able to know, because even Jesus said He did not know when it will happen.

I believe it is foolish to try to second-guess God, and to do so points to a vanity that borders on conceit. Christians are warned to always be spiritually ready, which would logically encourage them to always be good (this is not to say we are saved by works; but our works are the visible portion of our faith). We are not to keep count; we are to keep ourselves from falling away from the faith. Our own ascendency will happen one day, but there will likely be no specific warning to set your watch by; only a general pattern of warnings enumerated by Jesus Himself.

Hit by a "Bibi".  The other outbreak of foot-in-mouth disease was committed by no less than President Obama. In a speech obviously intended to paint Israeli Prime Minister Benjamin Netanyahu into a diplomatic corner, Obama gave a press conference - while Netanyahu was still boarding a plane to his meeting with the president - in which he outlined the (suddenly new) US position that Israel should effectively commit national suicide by going back to the "1967 borders."  Shortly thereafter, while trying to talk out of the other side of his mouth to Jewish deep-pocket Democrat contributors (modern-day 'kapos') at the American Israel Public Affairs Conference (AIPAC), Obama back-stepped by telling the audience he meant to say his earlier comments only reflected "a public expression of what has long been acknowledged privately," referring to the "two-state solution," and that the borders would be "different;" kinda-sorta implying that the  world didn't hear what he actually said in his televised statement. Of course, his audience consisted of privileged people who have no real concept of what it would be to live (as long as they were able to) in a "two-state solution."  Now, you might think the Jewish moneybaggers (and that is not meant to be a slur against Jews, only this particular group mentality) would see right through Obama's hypocrisy; but O got a standing "O" from the influential but myopic champagne-and-bree crowd, which has been graciously helping to finance their own eventual destruction through the Democrat party for decades.

Many politicians would have bit their lip and tried to make the most of what Obama had put on the now-public table. Alas, and fortunately for the great people he leads, Benjamin 'Bibi' Netanyahu is anything but your usual politician. With the press in the room, the Prime Minister responded (with Obama sitting two feet away) that the two-state suicide solution "isn't going to happen." Obama took the schooling from Bibi stone-faced, while gripping the arm of his chair, possibly to prevent himself from running out of the room crying. The Prime Minister then spoke before Congress to reinforce his point that Israel isn't about to roll over and play (or become) dead.

The absentee president.  Doesn't it seem odd that virtually every time a major disaster occurs in this country, our imperious leader is gallivanting off to other countries, generally adding insult to our injury?  Typically, if he's not taking his family on vastly expensive taxpayer-supported vacations to Europe or the Far East, he's selling us out to our competitors such as Brazil. This time, while thousands of Americans are suffering death and destruction from wildfires, floods, tornadoes, etc., he is off embarrassing himself, our country and the Queen of a country he obviously hates, while dissing another valued ally leader, and drinking beer in a country we have no serious diplomatic, military or economic ties to.  Obama - touted by the Kool-Ade drinkers of the Left as "the most intelligent president ever" - has almost as strong a grip on the realities of leadership as I have on math (ugh...don't ask). It has become almost a mainstay of his presidency to afford guffaws and winces from audiences both here and abroad; and that doesn't even include Gaff-master Joe Biden! He seems to have such a poor grip on basic facts, even on important issues, that it is no wonder he depends so much on other people putting words in his mouth (or on his teleprompter).

Apart from his ignorance of US geography ("I've been to 57 states so far; I think I've got a couple to go"), his intentional slighting of every one of our allies, his obliviousness to diplomatic protocol, his really bad Irish accent attempt, and his seeming attractiveness to bugs and rodents, Mr. Obama is a grotesque caricature of a leader. And I'd be laughing at him along with most of the world, if it weren't for the incredible damage he has done and continues to do to this nation, its people, and our future.

Dread storms rising.  By far, the worst news of the week, as far as Americans are concerned, was the deadly aftermath of unprecedented destruction in the wake of numerous tornados, at least one reportedly measuring up to a mile wide. More than 132 people were killed and more than 750 injured by one of the megatwisters in Joplin, MO, as it cut a blocks-wide swath through the town on Sunday.

But amid all the carnage, the greater story may be one that has hallmarked Americans since our inception as a nation. It is the story of everyday heroes; ordinary folks who, after crawling out of the rubble of what used to be their homes, banded together to dig others out of the ruins, to begin the initial work of clearing debris from streets and giving whatever aid and comfort they were able to their neighbors, many meeting for the first time.

Pree-sent arms!  Monday is Memorial Day. Contrary to popular acceptance as just another day off, it is a day of solemn commemoration of our fallen fellow Americans, who gave all so that we could lounge around and take advantage of the freedoms they paid so dearly for us to unappreciate.

This time around, try looking at it a little differently; not so much as a celebration or kick-back day, but, at 3 PM, to behave for a moment as though we were in church. Those who have died to protect this nation did so - wittingly or not - in the spirit of Christ. Neither He nor they wanted to die, but most went willingly (if reluctantly) to face death and the enemy, so that we wouldn't have to.  The least we can do is give them a moment of silent reflection, with a whispered "Thank you" for those who never returned home. Heroes deserve to be honored.
Posted by Chuck Teal at 9:26 PM