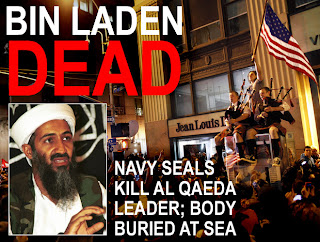 The week began with one of the best news items Americans could hear after years of daily doses of depressing reports: that the reviled Usama (or Osama) bin Laden had been killed in a gun battle with the most elite unit of the already elite US Navy SEALs, on loan to the CIA. Incidentally, we might not have known who was responsible if not for Vice-president Big Mouth. Thank God we didn't have Joe Biden around during World War 2; we might all be speaking German and eating rice...or wearing chains.  But I digress.

The scumbag who planned the 9-11 attacks was shot and killed while "heroically resisting,"﻿ his body was positively identified, and after far more care and respect than he deserved his corpse was dumped in the sea, presumably to prevent his followers from having a graveside shrine for recruits to take their blood oath over. What makes it all the more sweet was that there were no American casualties other than a helicopter they had to abandon and destroy, and they didn't have to waste half the neighborhood in the assault on bin Laden's compound in urban Pakistan, either.

Lest anyone feel that we've spent too much attention on finding and finally getting UBL, we should remember that hundreds of thousands of lives have been taken or adversely affected and hundreds of billions of dollars wasted, all because of this lousy excuse for a man. It was directly because of his incitement, planning and financing that two huge towers fell in New York City with the loss of nearly three thousand people, more than a hundred lost at the Pentagon, dozens more in a field in Pennsylvania, thousands of Americans and tens of thousands of natives in Afghanistan and Iraq (would we ever have gone there without the impetus of bin Laden's actions?), the loss of our freedoms due to "security needs" and the overt and subtle changes that resulted from his affect on civilization around the world. All that tragedy justifies, in my mind at least, all the initial celebration on the success of this mission as well as the immense pride in our own armed forces, especially the most elite arms of those forces.

The signing of the order to attack may have been president Obama's singular shining moment in the eyes of American conservatives, reminding us that even a stopped clock is right twice a day (although the White House seems as in the dark as we are on the details).  Signing off on the mission, which reportedly took him 16 hours to decide, came as a welcome surprise to most of us, especially since so many indicators, including his choice of advisors, leads us to believe his primary interest isn't the best interest of the American people. But he had barely announced the completion of the mission when Obama deflated us once again, by reminding us that "America is not at war with Islam." He seems to still not understand (or thinks we're too stupid to notice) that Islam is at war with us. They have been working against the voices of freedom (as have progressives and other socialists) openly, surrepticiously, and historically. While there are Muslims who do not join in that jihadist doctrine, those friendly - or at least, neutral - voices are few and far between; most remain utterly silent (although, I can understand why they hesitate to speak up - noisy sheep are often the first to fall to the wolves).

As might be expected, within a day or so after the mission's successful outcome was announced the PR aspect of our military success began falling apart. On the one side you have malAdministration officials telling us the photos of Osama's ventilated corpse would be shown, only to later be contradicted by Obama himself, who refuses to release them, purportedly because showing such photos would "inflame the Muslim world" and "could endanger our troops." Yeah; he seemed not to be so concerned with that possibility a couple of years back when he wanted to release more Abu Ghraib photos, which did indeed incite recruitment of terrorists and attacks at the time.

The question is, does his current stance point to some sort of maturity in the office, or is it merely politically expedient? Do I really have to ask?  Besides, does it really take a picture to inflame the Muslim world against us? I mean, what doesn't piss them off?

Meanwhile, the president's continual undermining of our security in other matters - such as granting citizenship to convicted terrorists still perplexes and endangers us.

Another thing that endangers us may be even more insidious than the terrorists themselves. A recent Yahoo report reveals that the majority of teens today don't have any idea who Osama bin Laden was, or why we were so happy to get him. After nearly a decade of war and terrorist hits around the world, young people are clueless as to who the good guys and the bad guys are.  Most of the young people revelling in the streets after the announcement were merely exercising another excuse for a party, with no real idea why.

But is that any surprise, really?  Too soon after 9-11, the major networks decided not to show the planes hitting the two towers or the Pentagon. The Left went into overdrive to convince those who did take an interest that it was all an "inside job." The rest of the generation born shortly before the day of infamy or since have been so wrapped up in their own self-gratification or the sensuality and single-mided pursuit of fame of American Idol (-worship), Glee, Gossip Girls and other vanities that most truly have no idea of the real world around them. We may have literally protected many of them to death, because their blissful ignorance will get them killed by not taking the threat seriously.

Nevertheless, no one should be deluded into thinking this act of retributive justice will make us any safer. To the contrary, new threats are already appearing from Muslims who can't quite get the hang of "what goes around, comes around." There are groups of Muslim radicals such as Hezbollah which have already set up operations at and across our border.  Certainly, there will be more attacks against unsuspecting civilians, unwary military targets, and if they get the opportunity, against our economic centers and infrastructure. But lest you fret too much over the next act of "revenge," keep in mind that they never rest from finding new ways to kill us, so any new threat is merely a mask over the old ones. All the more reason to keep our heads on a swivel, be aware and be as mentally and physically prepared as possible.
Posted by Chuck Teal at 12:07 AM