It has been nine years since the worst, most audacious (now who does that bring to mind) attacks on American soil in peacetime history. Many on the Left, including our insane government, continue to apologize to Islam and to repeatedly insult us as though we were the real provocateurs.

Of course, there are those provocateurs who either cannot see the illogic and danger of their actions, or they cannot see over the top of their own ego. Take Florida Pastor Terry Jones, whose ill-conceived threat to burn the Koran on 9-11 has inflamed Muslims worldwide - as though they needed any actual reason. Pastor Jones "reached out" to Imam Rauf in what was (widely) advertised as an attempt to stop the construction of the Ground Zero mosque.  But apparently Jones' bluff has been called, and after predictable flack from the president, General Petraeus, the liberal media and even a few sane minds, he has backed off of his promise to torch the Muslim screed.

So, again, the fact that the proposition to build that mosque in that location as a slap in the face of Americans gets a free pass and is defended by the top level of our own government, while even a muted protest by one publicity-seeking Christian pastor is looked upon as an assault on Islam itself.  This is just one more indication - and there will be many more, to be sure - that there is absolutely NOTHING we can do, short of total surrender or total destruction, to mollify the Muslim mind. We seem to forget that "Islam" is Arabic for "submission".

Apart from most of our armed forces (the individual grunts, not necessarily the senior officers), many veterans, and a relative smattering of hardcore, Never-give-in type A's, most Americans follow the "10-80-10 rule," also known as the 'normalcy' bias, meaning that 80% of the population would sooner sing the praises of Mohammed than raise a finger to stop the spread of Islam and the future terrorization of every aspect of life.  The life of every great civilization has always depended on the roughly 10% of the population that will go to any length to do what they consider the "right thing," including fighting for the survival of the nation and their families. More Muslims seem to be of that 'type A' mentality, but are actually reflecting the social mores of their culture, which seems to breed an attitude of arrogance, moral superiority and a general disdain for civil intercourse and mutual consent. 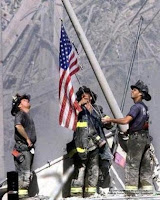 I think we may be entering a time when the American psyche has had enough. We've always been a fairly patient and moderating people, but every so often there comes a point where we consensually draw "a line in the sand" against those who try to bully us.  Islam is rapidly and repeatedly crossing that line, as though intentionally trying to push us into a severely reactive mode. Perhaps one day they will push just past the 'tipping point' and will find us no  - longer willing to give ground to them any more. After September 11, 2001, America pulled together, licked our wounds, and demonstrated our resolve by reminding the world that the terrorists weren't the only ones capable of 'shock and awe.' But then, the government was on our side.

Now, our own government has - literally for all intents and purposes - joined the enemy, and that puts us at a severe disadvantage, as it hobbles our rights and drains our resources, even as it forces us to be even more dependent on it for protection, support, and our day-to-day sustenance (it is gaining increasing control of our healthcare, food supply, and economy as it grows the police presence exponentially - even as it refuses to properly guard our borders).

What form will our counter-rebellion take, as we grasp once again the power of the people our Founders entrusted to us?  I don't know. Perhaps it will be massive, passive resistance as Americans, fed up with the temper tantrums of Muslim malcontents, begin to boycott the Muslim-operated businesses that funnel billions of our devalued dollars to the coffers of terrorist organizations like the Muslim Brotherhood and their more political sychophants such as CAIR.  Perhaps it will be a political groundswell against some outrageous action by a Muslim against an American woman or child. Or maybe it will be a massive armed civilian retaliation against an equally egregious violent attack against a shopping mall or school.

Regardless of the instigation, there will come a response, and it will come like a tidal wave. Innocent people will get caught up in it, as always happens. I find myself in a precarious "fight or flight" mentality. I yearn for peaceful resolution, but I realize that in this world, some folks absolutely refuse to cooperate with peaceful coexistence and the common good. I also understand that every religion and every sect, and every denomination in the world is convinced they have the right answer.  In the end, there can be only one Truth, and it will be interesting to see whose (if any) it is.

Meanwhile, and while we still have time, I strongly urge everyone to make their best possible effort toward protecting their family. If you can, move to a more secure home; begin to gather supplies for longer-term survival in the event the supply chain breaks down. Learn basic first aid, combat-oriented self-defense (instead of flowery 'sport' martial arts), firearms handling and general survival techniques, and build solid relationships with others who have complementary skills.  And don't assume you're simply going to move in with the neighborhood "survivalist" when the feces hits the ventilator, because odds are he's not going to hold an open house for people he doesn't know, can't trust or depend on, and who arrive empty-handed and empty-headed.  Let me put it another way: how much do you really care about your loved ones?

And lest you think being a Christian puts you above such matters, consider the following:
Proverbs 6:6-11  -- Go to the ant, you sluggard! Consider her ways and be wise, which, having no captain, overseer or ruler, provides her supplies in the summer, and gathers her food in the harvest. How long will you slumber, O sluggard? When will you rise from your sleep? A little sleep, a little slumber, a little folding of the hands to sleep - so shall your poverty come on you like a prowler, and your need like an armed man.
Ecclesiastes 3:1-3 -- To everything there is a season, a time for every purpose under heaven: A time to be born, a time to die; a time to plant, a time to pluck up what is planted; a time to kill, a time to heal; a time to break down, a time to build up...
Luke 22:36  -- Then He said to them, "But now, he who has a money bag, let him take it, and likewise a knapsack; and he who has no sword, let him sell his garment and buy one."
1 Timothy 5:8  -- But if anyone does not provide for his own, and especially for those of his household, he has denied the faith, and is worse than an unbeliever.

Bend over!  If we're not more careful, every American (except the power players and their minions) is going to be broke, silenced and absolutely enslaved, because the phrase "absolute power corrupts absolutely" may never have been so true in this country as it threatens to become now.

Apparently, Team Obama is now plotting to introduce a 1% "transaction tax" that will siphon off a penny on every dollar for every transaction you make through a bank, credit union or other financial institution. That may not sound like much, but it's going to feed the government coffers like a (and I hope the weight-challenged will forgive me) fat man at an open buffet, and it's that much less for you to feed your family with. If you cash a check for $100, you will give the government a buck, for nothing. Or, if you're really in a conspiratorial mood, it will help finance more government control against you. Sort of like feeding your fingers to the lion that is sitting on top of you, isn't it?
Posted by Chuck Teal at 11:50 PM