Brother, can you spare a dime?

Perhaps once in your life you've heard a comment that goes something like, "I'd give all the money in the world for ______..."  Yeah; maybe it was Debbie, that beautiful girl who sat across from you in homeroom...mmmm...uh, what was I talking about?

Oh, yeah. Well, it's now all but official, all the money in the world couldn't pay off our national debt as it now stands, if you include all unfunded liabilities, which is defined as "promises to spend money in the future in excess of the funds available." The actual numbers are staggering. 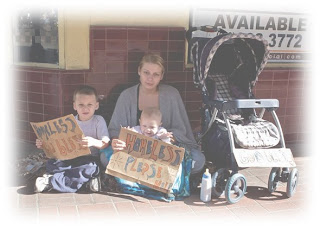 But that's not the end of the story. According to the Census Bureau, America's poverty rate is higher than it has been in the past 51 years (as long as the government has been tracking it), now estimated to be around 14.3% and includes virtually all races and ages.  The number of Americans without health insurance also increased from 43.6 million in 2008 to 50.7 million one year later, largely due to the huge numbers of the newly-unemployed and the increasingly unbearable burdens put on employers. The dismal business climate is continuing to drive even more of the relatively few remaining manufacturing jobs to move offshore or close their doors. Although, as Jesus said, "The poor you will always have with you," the deliberate dismantling of our economic structure and open government hostility toward market forces over the past couple of years -facilitated by both Demoncrats and Republicrats - has greatly contributed to this disturbing trend.

One has to wonder how far ahead the global elitists have thought. When the entire planet is brought down to the same level of poverty, hopelessness, apathy or anger, who is going to provide all the needs and luxuries for our "betters"?  As was proven by the usually inferior production standards of the Soviet Union, when everyone is equally miserably, people generally stop trying to do exceptionally well. In the long term, the circular logic of socialism will come back to bite them. The tragedy will be all the wasted lives resulting from their repressive and faulty philosophy.

Well, as long as it's part of your strategy.  Frances Fox Piven, the distaff half of the team that brought us the Cloward-Piven strategy for social chaos, recently did a Book TV C-SPAN 2 interview interview in which a questioner pinned her down about her thoughts on political violence. She apparently believes Martin Luther King and others in the Freedom March were almost planning on white violence to make their point. Maybe. But the pictures I've seen of their faces in the march looked more like fear and apprehension than hopeful anticipation.  After a bit of hedging, her conclusion seems to be that politically-motivated violence(such as staged riots, car burnings, storefront trashing, etc.) is OK "if it's part of your strategy." Spoken like a true communist. 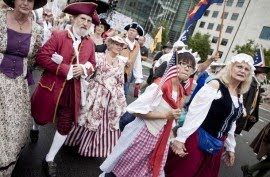 "Come as you are" crisis.  Glenn Beck stirred up another hornets' nest of controversy, this time mostly among his own fans and some of the more exuberant members of the Tea Party movement, many of whom arrive for rallies in full costume and/or bearing signs that highlight their point. Glenn recently made the plea that if you want people to take you and the movement seriously, leave the costumes and signs home.  Fans (many of whom presumably were those who committed the sins) clogged the show's phone lines, complaining that Beck was more or less slamming the very people who were the most passionate about the cause.

But I believe that in their sudden embarrassment at feeling he was mocking them, they missed his point, and indeed, misunderstood what he was telling them. He as much as said that there was nothing to be ashamed of for their initial displays (he himself admitted to costuming with his sisters during the Bicentennial celebration), but that now the time had come for more "respectable" tactics.

I agree with Glenn on this.  In the early stages of a fledgling movement, the key is to get noticed.  The size of the crowds, visually amplified by patriotic costumes and homemade signs with slogans that instantly got the point across definitely got them noticed. The images presented by the protestors connected with the more traditional and common-sense-based American populace, which helped to expand their base and their perceived political clout. But now that they have achieved that critical level of popularity, it is necessary to move on to the next phase: being taken seriously as a political force.

Once a group reaches a certain point, it must alter its tactics to fit a changing role.  The only way the Tea Parties can succeed in overcoming the inertia of the Demoncrats and Republicrats is to be taken seriously by the general public, and eventually to gain gravitas with the media. Watching crowds with signs and colorful costumes is no longer sufficient. The movement must do just that - it must move beyond mere entertainment value, and become a credible political force.  Glenn Beck is frequently mocked by the Loony Left, but he's right far more often than not. And this time he's spot on target.
Posted by Chuck Teal at 12:04 AM