A small story passed through the news outlets this week that most people either missed completely or missed the significance (as I see it) of it. The YMCA is changing its brand and and logo to simply "The Y".  When I went to the "Y"s website searching for their history I found that the page had been scrubbed, although you can still find some of the history at local Y sites. Fortunately, you can still find a decent history of it at wikipedia.

No big thing? Hardly. It's another step in deChristianizing our culture. So, it's no longer known as the Young Men's Christian Association (not that it's been an overtly Christian outreach for a long, long time). Now, it's just an ambiguous letter, something that will grab the attention of a very short-attention-span culture.

We're seeing this trend throughout the nation, although it happens on such a low-key level most people don't even notice. More hospitals, nursing homes and other care-giving centers - originally founded almost exclusively by Christians - are losing their "St. (Saint) ....." names as they are gobbled up by secular conglomerates and holding companies. The Roman Catholic Church is shrivelling up because they lost control of their own message and allowed their priesthood to be infiltrated by socialist activists and pedophiles. Much of the Protestant Church has followed a similar path, preaching the "social gospel" instead of the salvation gospel, "social justice" rather than equal justice. The trend is seeping out into the general culture, such as it is anymore.  Anytime now I expect the American Red Cross to come up with their own "less confrontational" symbol. Wouldn't want to distress those atheists, Muslims, and Wiccans now, would we?  Oops; they're already considering it.

Maybe you're someone who doesn't believe in God, so all this hullaballoo doesn't really mean anything to you.  I urge you to give it a little more thought.

Many secular humanists, or nonbelievers by whatever title, ideologically tend to see Man as basically good, whereas the Christian Church (at least a majority of traditional Protestant denominations of the Lutheran/Calvinist bent) views Man as a creature fallen from God's Grace because of Adam's sin.  Working within this premise, the main reason government always leans toward corruption is due to that fallen nature. The unrealistic expectation is that you can bribe (and/or trust) people to be good indefinitely, based simply on the supposition of intrinsic goodness. Unfortunately, such "goodness" among the unsaved only ever lasts until the bribes run out, or the increasing need for greater bribes surpasses the individual's ability to resist temptation. Our Founders understood this principle, and incorporated safeguards into our US Constitution. It both highlights and requires protection of the basic Rights of man (and states the source), and provides a balance of power among those who rule. The people of our nation in particular, and billions of people worldwide have enjoyed, if not appreciated, the products services and moral safety net that Christianity established over the past two millenia.

No parchment, document or law can insure the morality of a culture, and mankind remains imperfect, tainted, morally weak, and ultimately selfish. Nevertheless, our original form of government, coupled with a deeply-embedded Christian worldview, has been a beacon of hope and a shining example to hundreds of millions of people around the world for the past couple of centuries. Americans in particular have been riding the coattails of the Protestant work ethic and moral code, but so many can't even see the relevency. Most of the world has benefited from America's greatness. Not just our technology, but our ideas on how man should behave toward one another. The world has seen us make mistakes, but they've also seen the great effort and progress we've made in overcoming those mistakes. 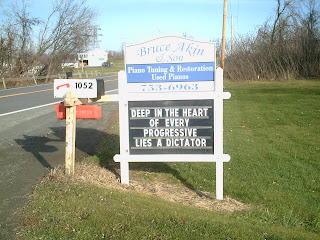 Now we live in an era not so much of change, as of destruction; the willful, conscious eroding of the very principles and protections that have allowed our national greatness. The envious have taken charge through guile and deceit, and they are gutting us from the inside out.  As secularists slowly minimize or steal the presence, effect and symbols of our faith, they are also determined to remove the cultural witness to the greatness that Christianity has accomplished. At the same time, they are slowly stealing our hope, as each successive generation gets less exposure to its tenets and teachings, and that will insure ruin and hopelessness for us all. In the end, those who have cried for "change" will eventually fall to their knees and hope to change back. But by then it may be too late.
Posted by Chuck Teal at 10:32 PM

Email ThisBlogThis!Share to TwitterShare to FacebookShare to Pinterest
Labels: The "Y", US Constitution