"You've come a long way, baby!" As a teen in the late 1960s that line (first used in a cigarette ad) became a familiar refrain among the hipsters and radicals who resented everything about America and who sowed dischord and dissent wherever they could. Bill Ayers, Bernadine Dohrn, Huey Newton and many, many others were active in the Weather Underground, the original Black Panthers and similar underground organizations, essentially doing the bidding of the Soviet KGB and other Communist organizations working to cripple the United States and further our descent into socialism - which is the steppingstone to full-blown communism. Proclaiming their manifestos prominently among the colleges of the day (as well as now), young people who had been the first generation to not be taught patriotism in the schools became the first generation to actively rebel against the very culture that had provided all their needs and too many of their wants.

Setting goals.  If you've ever seen the list of 45 Communist goals that was introduced into the Congressional Record in 1963 by Florida Rep. (R) Albert Herlong, you may recall that the first two items related to the weakening of America's nuclear deterrence. And if you're one of those rare persons who pays any attention to the news of the day, you're aware that President Obama has continued down the path laid by his predecessor in gutting US nuclear response capability, in part with the signing of the New START treaty.

Have you ever really given any thought to what living in a Communist Amerika might be like?  We have a few models: every nation that has installed full-blown communist government. And virtually every one of them is an economic and moral basketcase.

According to an article on http://www.buzzle.com/articles/socialist-economic-system.html (it becomes obvious the article was written by a Leftist), "The following is a summary of the definition of a socialist economic system (my responses in red; ironic, eh?):

•Ownership by Government: The principal characteristic of a socialist economy is the governmental ownership and nationalization of key production sectors. Though in theory almost all firms and companies should be nationalized, in practice, such a transfer from private to public is almost impossible. Due to this governments are promoted to rely on some private establishments that are largely regulated and managed by governmental laws and officials. Organizations that are involved in production in many cases are co-operative organizations, instead of firms and companies.  [One of the major factors of socialist takeover of manufacturers is the control of labor unions. Prior to total socialist control, unions gain increasing power by blackmailing and extorting the manufacturers into granting unsustainable payrates and benefits which, over time, will bankrupt the biggest corporations (see the Cloward-Piven strategy). When government takes over, the union has no more leverage. In order to maintain production levels, the benefits must be cut back - sometimes dramatically. This lowers worker incentive, and either quantity, quality or both begin to suffer as worker apathy sets in. The society ends up with inferior quality goods, and shortages of the same. This leads to longer lines of citizens waiting for their 'rations' of goods. Of course, the best quality and first access to the goods available will always go to the Party faithful first, and the military, second. The civilians will fight over the scraps.]

•Progressive Taxation and Wealth Redistribution: Often considered to be a drawback of the socialist economy, taxation system, progressively taxes higher income with higher tax percentages. The collected mammoth tax is then redistributed with the help of several public welfare schemes and policies. [How long do you think that "mammoth tax" will continue to be collected? The "rich" will either go broke from the money hemhorrage, or will find some way to hide their money. In response, the government will lower the bar on whom it considers to be "rich", until the middle class - which produces the majority of jobs and is the most productive sector - goes broke too. How long can a government survive when there are only three classes of people remaining: the exclusive Party elite, the military/police "hammer", and the rest of society on the welfare line to get its part of the "redistribution"? This is so apparent that even some of the malAdministration wonks are beginning to think. Ben Bernanke argued Thursday for the renewal of the Bush tax cuts.]

•Price Control: Another distinct feature of a socialist economy is the technique of price control. Prices of commodities are not fixed by demand and supply analysis, but are fixed by the government, with respect to the necessity and nature of the commodity. [What will government do when the eventual shortages occur? The history of the world has been lived around the concept of supply and demand. If the supply of say, bread, goes down, everyone will expect the same amount of their ration at the same prices. When they're told that they will get less for the same amount of money so others can have some bread too, they're going to get angry, and so will the people at the far end of the line when there's nothing left. That happened frequently in the Soviet Union. The Party members had their own shopping mall, the GUM (only Party members could afford to shop there, and could get the craved Western goods), while the peasants got crumbs, if they were lucky.] 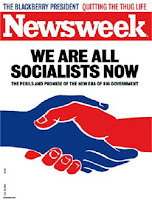 •Nationalization and Centralization: A socialist economic system is basically operated by a central government. The nationalization and centralization of all avenues of production are handled by one centrally based government that also frames the fiscal policies. The success of a socialist economy is found in such a convention where fiscal policies so implemented are executed by regional and grass root level administration, with an absolute timing and discipline. The economy, as a whole, thus, becomes very, very successful. The GDP shoots up almost instantaneously and poverty is abolished. [The writer glosses over a couple of phrases: "regional and grass root level administration" - increased bureaucracy at every level of production and society. Everything will have to be approved, which will take time, and usually, money. It is the breeding ground for graft and extortion. The other phrase is "absolute timing and discipline." I'll give you credit for intelligence and let you dwell on that one.]

When Obama was elected, Newsweek ran a cover story stating boldly and arrogantly that "We're All Socialists Now." Uh, over my cold, dead body.

Daddy, what was privacy?  You may have noticed that when Congress passes bills that exceed the length of a Tolstoy novel and the Webster's Unabridged Dictionary - combined - it generally takes a while to discover what is actually in the new laws they are imposing on us. That said, we're now in the "discovery mode" concerning the 2000-plus-page Obama healthcare megabill and the stimulus bill that was pushed through despite opposition from over half of Americans (that would actually be the less-than-half of the population that actually pays the bills). Among the tidbits from the stimulus package is Section 3001. That's the part which will require all our medical records to be accessible to the government. Providers will have to comply with the Electronic Health Records (EHR) law by 2014, or "suffer penalties". Currently, officials claim that patients and doctors may decide not to enter certain records, such as HIV status or a history of abortion; but, knowing government, that may change.

Now the White House is behind legislation that would force US businesses to give the government data on every employee's pay, as it relates to sex, race and national origin. Anyone remember what privacy was like?

I'll see your army, and raise you one.  Hillary Clinton may have lost her bid to be president (so far), but she may get the opportunity to command her own private army in Iraq. The United States military is pulling out of the country next year, so the State Department wants to establish its own paramilitary force of private contractors, to protect what has become the world's largest foreign embassy and other diplomatic outposts.

Now, we're in trouble.  As if fighting two wars with diminishing resources, our president giving away our military superiority, and the imminent appearance of Iranian nuclear weapons wasn't bad enough, now we have to face another grave threat: North Korea's dreaded air-dropped umbrella traffic girls. Tremble with fear!

Parting shot: full of sh..t. Newark, NJ Mayor Cory Booker has taken a drastic measure to save money: the city will not buy any more toilet paper. OK; we all know that government stinks, but this is going the extra mile to prove the point.
Posted by Chuck Teal at 11:17 PM