This week my rant will be mercifully shorter than usual; I got sucked into an extended period of argu...er...debating with people on FaceBook, on different topics in different pages. My bad. Unfortunately, keeping my mouth shut (or my fingers off the keys) has never been my strong point. 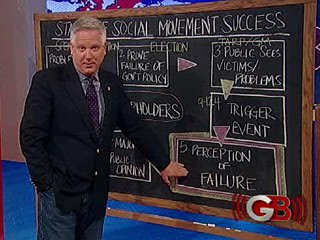 If you haven't been watching Glenn Beck - or the most boring yet most fascinating news item, kinda like [OK, grammar-hounds; that's a compound contraction of "somewhat similar to"] a slow-motion train wreck) this past weekend - you missed seeing the uber-liberal blogosphere's communal lovefest nearly implode with angst and animosity toward Beck. You also missed his three-part expose of the Left's strategy, which is based on the old Weathermen's manifesto and uses the tactics laid out by Saul Alinsky. He spent three days giving us insights into the radical thinking that has taken us away from the course our Founders set us on over two hundred years ago. Each night, he showed us the radical thought process that formed the long-term behavior of 1960s radicals, where those radicals are today, and the actual game plan they have followed for over forty years. What fascinates me is that I remember these people in their formative, chaos-creating days, since they're typically only a handful of years older than I am. To see them suddenly put under the light of publicity and see their trail (thanks, Glenn).

On Monday, Glenn also showed clips from the weekend Netroots Nation conference in which the progressive (e.g., communist "useful idiots:) legends-in-their-own-minds were borderline apoplectic because - in the words of James Rucker of ColorofChange.org,  "I can't get [Beck] out of my head."  Then he showed us the graphs designed by PBS hero Bill Moyers, in his revolutionary treatise The Eight Stages of Successful Social Movements. All this at a time when many of us are worried the radicals might actually achieve their goal of turning the United States of America into another economically and morally bankrupt socialist puppet state. Could it be that at our moment of deep doubt, we also see the beginnings of victory? 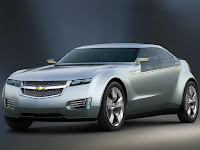 Low 'Volt'-age?  President Obama proudly displayed himself behind the wheel of a brand-new Chevy Volt this week, proving once again that his skill as a car salesman is as empty of value as his presidency is of integrity. The Volt is being hyped as the car that saved GM, but instead it has turned out to be - even to the New York Times - far short of electrifying. For starters, it only gets 40 - count 'em - 40 miles to a charge, and then has to switch to its gas engine to run/recharge it; and the gas engine runs on premium gas, which, ironically, the compay says is more efficient, albeit more expensive. Oh, and it costs a staggering $41,000, before a $7,500 taxpayer-funded tax credit that the taxpayers have to absorb. All this, after Obama's brilliant Energy Secretary Steven Chu cancelled the program for the long-promised - and technologically promising - hydrogen-powered car.

On the other hand, the new Nissan Leaf gets a reported 100 miles per charge, has no gas engine, and costs $33,000 (which drops to around $25,000 with incentives).  Obama has touted his malAdministration's takeover of GM as a sign of progressive fiscal genius. Instead, he has proved once again the folly of government pretending that it can effectively run anything, other than this nation into the ground. In any case, electric cars will probably wind up plugged into the owner's house current for substantial periods of time, and dollars.

(Compass) point of interest.  Just a little aside; apparently the worshippers at a mosque only a few miles from Mecca have suddenly discovered that they have been praying in the wrong direction - for ten years! In case you aren't up on your Islamic rites (all you infidels will soon learn the error of your ways, you dogs!), Muslims are supposed to bow down and pray toward Mecca five times each day.  For some unexplained reason, these folks who live spittin' distance from the holiest shrine in Islam have spent the past decade aiming their prayers to the north instead of southeast, actually praying closer to the direction of Israel. Go figure.  I guess it really is easy to get lost in the desert.
Posted by Chuck Teal at 10:59 PM