Iran's colloquial britches must be feeling too small, since they are becoming more and more brazen in their attempts to throw the entire planet into war. Among their tactics is using their fleet of cargo ships to move contraband in an elaborate "bait and switch" game. By continually changing the owners, names and national registries of the ships, they are giving headaches to anti-terror enforcement organizations around the world. They have been discovered using at least one of the ships to secretly pick up a luxury speedboat-cum-torpedo-capable fast attack boat in South Africa, in another effort to bypass international sanctions.

Tipped over?  For some time now, certain conservative thinkers and worriers (yeah, that would include me) have been warning that America is headed for a "tipping point" wherein the pressure and influence of the Left will become so great that this nation will turn irrevocably toward socialism. In recent months, it has become even more of a concern as events appear to be spiralling out of control.  Or are they really out of control?

Among the greatest concerns are a huge portion of the population that has grown up in an increasingly leftist culture. The American education system, once the best in the world, has become little more than a  propaganda mill that prioritizes sexual promiscuousness over literacy, promotes 'tolerance' of every aberration yet demonizes traditional values, attempts to bury the real-world (Darwinian, no less) concept of competition, and inculcates an acceptance of relativism and moral equivocation that makes young people nearly incapable of determining right from wrong.  Among the relatively few people who seem to"'get it" these days are (mostly Christian conservative) home-schooled children and refugees from communist nations.

Let me ask you this: do you know the differences between our formerly capitalist system and a communistic (which is the eventual end-stage of socialistic) government? Do your children or grandchildren? I don't mean the simple economic differences (although most don't have a clue about those, either); I'm talking about the dramatic differences between a free and responsibly-run society and a cradle-to-grave, jackboot-on-the-neck, ultra-managed society that cannot afford to allow personal freedom, treats personal independence as a threat to the status quo, and tries to direct not only an individuals actions but his/her thoughts as well.  If you even said that sentence to most Americans today, they'd look at you quizzically and then their thoughts would drift off to who will get bounced from American Idol, which of their kids are they going to send to the store with food stamps, or simply "how do I get this guy to just shut up?"

There is also a very real threat that this may become a summer of extreme violence and staged anarchy, provoked to generate a crisis which will give the current regime an excuse to exercise really draconian power. 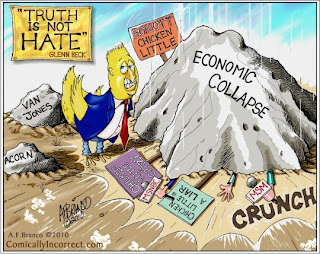 Oh, the irony!  In what must be a classic instance of "I told you so," Obama's Commission on Fiscal Responsibility and Reform is going broke. Starting with a mere half-million dollar budget, the commission now finds itself in the same precarious position as so many of the small businesses and industries that the malAdministration has caused to fall into financial straits. Of course, Obama wouldn't dare let his own commission flounder, so he'll probably print some more bogus bills to maintain the illusion that these people know what they're doing.

Speaking of "these people," it is a constant source of incredulity to watch and listen to modern politicians contort the language in Orwellian "Newspeak". Among the classic examples are (soon-to-be-ex-)Senator Harry Reid's take on our system of "voluntary taxation", or Rep. Hank Johnson's (D-GA) - one of the true imbeciles of Congress - concern that the island of Guam might tip over if we increase our military presence there.

If they and their ilk weren't so frighteningly dangerous they'd be funny. But they aren't joking, and not all of them are mere fools.  Although until recently they have generally masked their true intent, their plans aren't really hidden; most of us just haven't been willing to recognize their devotion to their cause as a serious threat. Whether they are politicians, professors, media elites, union thugs or just misguided citizens, these supposedly well-meaning liberals are racists of the worst order. 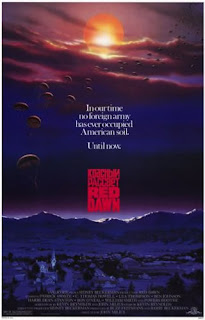 But many in America are waking up.  Thanks to the efforts of Fox News, World Net Daily and others to bring you the stories the other networks ignore or downplay, and brave souls like Glenn Beck, David Barton and others, there is a resurgence of awareness not only of what is wrong with America, but also what it started out to be. The American story and struggle theme is finally beginning a slow return even to the popular media. This is nowhere more glaring than the upcoming remake of the quintessential anti-communist film, 1984's classic "Red Dawn." In the new flick it's the Chinese who are the invaders instead of the Soviets. Whether "Red Dawn 2010" actually makes it to the big screen remains in doubt, however. Rumors are flying with various reasons why it may not be shown, although it is already in the can.
Posted by Chuck Teal at 11:56 PM