Anyone familiar with the work of Saul Alinsky will recognize that one method used to wear an enemy down is to isolate them from their friends and allies. That gameplan seems to be playing out in Barack Obama's foreign policy strategy, or lack thereof.

Obama's intentional snub of Israel's Prime Minister Netanyahu is perhaps understandable (albeit despicable), considering his Muslim preferences. And the dissing of Poland and Georgia might be dismissed as political expedience (of the cowardly type) in the face of Russia's resurgent aggressiveness and Obama's communist leanings. But some other snubs are more difficult to fathom.

Take Great Britain, for instance. The Brits have been one of our most stalwart allies for more than a century. The fact that we saved them from utter defeat in two world wars probably has something to do with it, not to mention Winston Churchill had an American mother, and there is that English language thing. The British have stood with us faithfully, but that may be about to change.

Barack Obama himself has gone out of his way to insult the Brits since he took over the Oval Office. Sending back a bust of Churchill, having photos taken with his feet up on the Resolute desk, giving PM Gordon Brown cheap DVDs that can't be played on European equipment and giving the Queen an iPod with his "greatest speeches"; these are not the hallmarks of honoring a valuable ally.

Now the Obama malAdministration is adding to the insults by supporting Argentina's illegitimate claim to the Falkland Islands, which the British Navy and Royal Marines had to take back by force after an Argentinian invasion in 1982. Needless to say, the Brits are getting just a little disenchanted...no...angry with our wannabe messiah.

The excuse for this behavior has been attributed to a report that Obama's grandfather was tortured by the British during the Kenyan rebellion of the mid-20th century. I can understand this, also, from a purely human instinct perspective. Still, such personalization of international relations has not been the hallmark of American presidents, and it does nothing to enhance either our international standing or our national security.


Bullet points for the week: 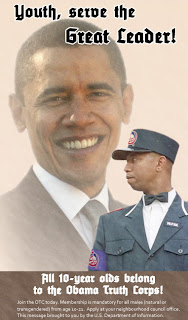 The Bell tolls for thee...  If you want an understanding of where we are and how we got here, catch Part 1 and Part 2 of an interview with former KGB operative Yuri Besmenov (it apparently dates from the 1980s). I learned of this master plan to conquer the US years ago, but I've never heard it crystallized so clearly by someone who should know how the brainwashing of America was accomplished.

The essence of what Besmenov speaks of is the indoctrination of children (here, here, and others) and it isn't just happening in this country; Obama is being used to indoctrinate Muslim children overseas) who then grow up with the virtually unshakeable belief that Obama is literally their messiah. This has been shown to be an effective tactic, most visibly in the Hitler Youth movement.

Another worrisome sign is the incrreasing chorus from the loony Left ( MSNBCs Ed Schultz, Woody Allen, Rosie O'Donell unflinchingly and clearly calling for Obama to become a dictator. We have reached the point of becoming a nation that has been intentionally made to forget its heritage.