At what point does a nation, a group of people or an individual finally decide that enough is enough?

On Monday, a flotilla of 6 commercial ships said to be loaded with relief supplies for Gaza attempted to run an Israeli blockage (it turns out that the total amount of supplies on all 6 ships reportedly amounted to only 25% of what legally flows to Gaza through Israel every day).  The Israelis claim that such relief ships have been used to deliver weapons and other military supplies to Hamas, and since Hamas has a tendency to fire rockets into Israeli neighborhoods and to blow up stores full of innocent people, they search the ships for contraband.  According to Israeli Deputy UN Ambassador Daniel Carmon, "They are not peace activists; They are not messengers of good will. They cynically use a humanitarian platform to send a message of hate and to implement violence."

What would normally have been a typical Israeli Navy boarding party to inspect for weapons turned into a deadly melee when a group of people on one of the ships attacked the Israeli Naval commandoes with knives, lengths of pipe and metal rods as soon as they came aboard.  The result was nine dead among the passengers, and several of the Israeli SEALS severely wounded. It might have been worse, if the Israelis hadn't been primarily armed with paintball guns, and real pistols only as backups.

As you could have expected, Muslim nations in the region used it as another excuse to go on another hatefest against Israel. Even though the provocation of the "peaceful protesters" was obvious, no element of the truth will reach the Muslim masses until it takes a torturous route through the lens of a media with a singular objective; the complete alienation of the Jews. The final objective is the utter destruction of an entire people. This is no recent or isolated phenomenon; it is the history of the Jews.

Is it, as some suspect, that this perennial persecution is the result of their repeated rejection of God and His Messiah?  I honestly don't know; but it is a terrible burden to realize that you are hated by most of the world for nothing more than your heritage.  And I don't need to join that demented chorus of  unreasoning hate.

The Israelis are in a no-win situation. They cannot afford to surrender more of their miniscule territory; whatever concessions they make will only be used to strengthen the positions of their incalcitrant enemies.  Whatever measures they take to protect themselves will be counted as "heavy-handedness" (as compared to the draconian security measures of their Arab neighbors?) in all the opposition press. They cannot defend themselves without providing propaganda value to their enemies, and their most important ally - the US - has repeatedly distanced itself; the Obama malAdministration has acknowledged Israel's right to self-defense while simultaneously pressing for concessions for the Palestinians and condemning its defensive actions at the UN. As one of the two most hated nations in the world, you'd think we'd be a little more considerate to our most consistent (if not only) friend in the Middle East, instead of being so politically schizophrenic.

The tragic, pathetic, revulsive truth is that if the Nazi Party were to rise up again (and it is) it would garner more international popular support - especially throughout the Middle East, Russia, and most of Europe - than the besieged state of Israel, which was founded largely by the survivors of the Holocaust.  Despite the preponderance of evidence and testimony of those who have witnessed the worst of history, we have nevertheless chosen to ignore those harsh realities by allowing our educational and legal systems and the popular media to rewrite that history into a mirror (that is, a reverse) image of the truth. We will thus condemn ourselves to relearning those terrible lessons yet again.

Not-so-free speech.  What do you call it when government desires to regulate journalism?  Hint: It ain't freedom if it's controlled by government.

The Federal Trade Commission (FTC) just released a 47-page "discussion draft" document with "suggestions" to artificially resuscitate print newspapers, which are failing throughout the country as the 24/7 immediacy of the internet and cable news supplant and surpass the old "hot off the press" dailies.

Curiously, most of the suggestions center around government incentives such as tax credits or other breaks such as "citizenship news vouchers", increased funding for state-controlled media venues such as PBS and NPR, grants to universities (is anyone else concerned how much influence universities have over our government?), consumer taxes to fund government news hacks. Millions of our countrymen still haven't had the intellectual curiousity or moral courage to tune to anything - such as conservative radio or the generally center or center-right Fox News - that rebuts the common talking points (even down to the identical phraseology) of the lamestream media. That sorrowful fact threatens not only all of us, it also threatens future generations.

In a nation (which used to be the most literate in the world) that no longer teaches but rather indoctrinates students in leftist ideology, it's little wonder that there are so many ignorant people in America today. I'm no special case somehow gifted with superior intelligence (as anyone who knows me will attest), I'm merely one of a growing number who has tried to pay attention to information sources other than the party/network line. And in that curiousity we've discovered - or are rediscovering - not only the real, rich and relevent history which has been systematically denied to a generation of Americans, but the devious connections which conspire to take our liberty from us and make us mere minions of a diabolical tyranny. Tyranny in other lands have previously been conquered or held in check by the principled stand of the United States; but when we fall, I don't see any great land and great, principled people to come to our rescue. 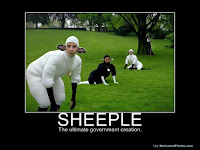 Hush...get 'er done!  Senator Jim DeMint of South Carolina recently revealed an incredible fact on the Senate floor, that 94% of Senate bills are passed in secret. He claims that most bills are passed without that formerly-esteemed body knowing what's in the bills, what sneaky and nefarious amendments they might contain, or even who is proposing them.  As such, they are the perfect complement to an educational system that no longer teaches how to think, but only what to think. A dumbed-down and ignorant people are an easily-led, easily-slaughtered people.

Swan song coming? President Obama's poll ratings have been dropping precipitously, on the Left as well as the Right, for several months as his policies continue to change America into something approaching a schizophrenic basket case. One sure sign of a decline in national prestige is when state and local politicians begin finding excuses not to attend the typical political stage-show when the pres comes to town, as recently happened in Pittsburgh.  Most of the regional politicians - including several Democrats - decided other things were more important than getting their pictures taken with Obama, even though more tax dollars found their way into the district only a coule of months ago.

Wireless snooping?  Ubiquitous internet giant Google is being investigated in the United States, Canada, the UK and Germany (so far) because of reports that while sending cars along roads throughout those countries to give detail to Google Earth's Street View, the cars were also recording data from unsecured wifi networks within range as they passed by. No explanations yet as to why, or how the data might be used. Presumeably it was done for commercial use, but with the prevalence of criminal data mining going on these days, and the government's increasing intrusiveness into personal information and limitations on our freedoms, it leaves a lot of questions unanswered.