How much room is there under the bus?

There's an old expression that says, "May you live in interesting times."  It isn't meant as a compliment. We are undoubtedly living in interesting times, and it certainly isn't a compliment to us. To those who are paying attention, the confluence of all the bits of information indicate that we are now plunging headlong toward an America none of us (at least those over forty or so) will recognize.

America was founded upon Judeo-Christian principles to be a beacon of liberty to the world; and we have been that for well over two hundred years. Never perfect (but there has never been a perfect nation) and not without flaws, America was nevertheless the one place in the world that oppressed  and downtrodden people could look to.  Even if they couldn't get here themselves, this country inspired people the world over and gave them the dream and hope that there was someplace where people could live and breathe free, pursue their dreams, and have the law actually give them some protection against oppression or persecution, if they could just get here and dig their heels in and work to achieve their dreams. Millions in other countries took up that challenge, coming here themselves with virtually nothing but the shirts on their backs. Others sacrificed so their children might chase the dream instead. 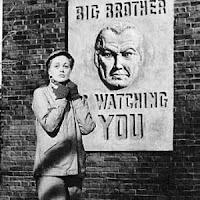 That dream is dying; or perhaps more accurately, it is being deliberately strangled. The principles that have shepherded us for centuries are being ignored, hampered, and impugned.  The next logical step in our transition from a free society to a cradle-to-grave authoritarian nanny state is probably a combination of contrived chaos (to produce a perceived threat) and judicial/executive fiat to modify, supplant, or repeal the laws that have traditionally protected us.

The US Constitution is neither taught, understood, obeyed or enforced by the current malAdministration, and this will only get worse. President Obama and his advisors and cohorts are gutting our constitutional safeguards and threatening the liberties that they are pledged to protect.

A short list of relevent examples would include:
Define 'sedition'.  Between watching our top government leaders and officials gut the Constitution, undermine our laws and betray our principles, and allowing taxpayer-paid teachers to poison young minds, the next generation of Americans will have no idea what it means to be in control of your own life.

I've said it before: Everyone begins life with their personal 'meter' at 'zero'.  All your positive life experiences push that meter upward, while your negative experiences push it backwards.  Today's kids have the most potential ever; not because they are superior, but because they can reap the benefits of all those who have gone and done before them. But if they are never taught to recognize the positive influences they should pay attention to, they will get sucked in by the negative influences.  It has happened before -- the young, the bored, the hungry, the angry, the frustrated, the scared, and oh, yes, the illiterate; all good candidates for evil leaders to take advantage of for their own nefarious purposes.


Our young people have incredible, amazing potential; but they could also be turned into a new generation of "stormtroopers" by being convinced that they are superior, or that they are "destined" to assist the advancement of a "Brave New World".  Unfortunately, most of them have not been told to be careful what they wish for. It is our present task, our responsibility, our DUTY, to try and teach them the difference between good and evil in an age of relativism, to teach them responsibility instead of entitlement; to teach them that God is superior to man, and that one's disbelief is not proof of His non-existence. It is a task we cannot accomplish alone or with ease, because the brainwashing, conditioning and propaganda has been eating away at them their whole, short lives. But we must try, and we cannot afford to give up.  Millions of lives - present and future - depend on what we do with our time here, and we will be Judged on our efforts.
Posted by Chuck Teal at 11:02 PM