Showing Our Soft Side

Have you ever faced real danger? What was your reaction? Did you click your heels together and say to yourself, "Because I don't want bad things to happen to me, it can't happen to me"?

Feel-goodism will not protect you from the evil intent of others. So, when the president of the United States decides to further cripple and reduce our nuclear deterrence at a time when Russia and China are increasing and improving theirs and rogue nations are entering the 'nuclear club', could that strategic retreat be looked upon as treasonous, considering he took an oath to defend this country? If not, what - if anything - does constitute treason in this day and age,where everyone is blameless except patriots and conservatives?

In Obama's semi-schizophrenic approach to national defense, he publically pledged that we would not to use nuclear retaliation against a country that, for example, attacks us with chemical or biological weapons (unless under certain conditions - as if that mattered), but in virtually the same breath notes that we would "reconsider nuclear retaliation "if" - according to the New York Times - "the development of such weapons reached a level that made the United States vulnerable to a devastating strike."  The possibility we might retaliate after the fact isn't really very reassuring.  Then why make such a preposterous (and potentially suicidal) proposal in the first place, especially when Russia will retain an "opt-out" option? Why allow an enemy to even contemplate that they might get away with an attack? Anyone else getting a sinking feeling of Jimmy Carter redux reflux?

While we're on the topic of national security and safety, how do you feel about Obama's decision to remove some of the inconvenience for people flying to the US from 14 terrorist-prone countries. The new rules will simply "will vet all U.S.-bound passengers against a broader array of intelligence sources." Did you get that? "Vet"; not search. Really?  That's somewhat like protecting our border with an incomplete 'electronic fence' (which has proven ineffective) instead of a sturdy, heavily-patrolled physical fence.

As our own policy-makers attack our intelligence agencies, try to cripple our intel-gathering apparatus, and alienate our closest allies (including those with the best intelligence networks, such as Britain and Israel), we're supposed to depend on someone telling us there's a terrorist on a particular flight? And you thought it took faith to be a Christian?

Adding intelligence is a good thing, of course. But if that's all you rely on, can you honestly say there's absolutely no chance that a person or a fringe group might actually escape the notice of intelligence agencies? Did I mention that the complaints about the previous system - which physically checked every passenger on the flights - were coming from Islamic groups? Or that the critical National Security Strategy document is being purged of any mention of Islamic extremism, jihad, or Islam? Does anyone outside the White House and Foggy Bottom think that refusing to name our most likely foes will convince them not to attack us?

While the president refuses to allow our government to "impugn" the name of Islam and hamstrings our military's rules of engagement in a combat theater, he has no reluctance to minimalize and marginalize our nation's founding faith, even to the extent of omitting the name of Jesus Christ entirely from it's historical context in his Easter address.

Any fair-minded examination of the evidence clearly indicates that Barack Obama is a socialist (at least), and that he is not operating in the best interests of this nation. The question Americans have to ask themselves is, Does it matter?

It is clear from these and many other policy changes that there are only two objective views of the Obama malAdministration's perspective on national defense: either they are completely clueless on how the real world and human nature operates, or they are consciously, deliberately and incrementally weakening the United States' ability to deter its enemies and defend itself.  Either one puts all of us in terrible danger.

Safe schools?  Britain has become the model for the new modern socialist police state: high prices on commodities limit what citizens can buy, limitations on hard-won freedoms have eroded to the point where people aren't even sure what they are allowed to do anymore, healthcare is so rationed and eroded that trusting the system may actually be increasing the mortality rate, and electronic surveillance is the most intrusive and omnipresent of any modern society thus far. Brits have given up nearly everything of real value for the illusion of safety and security. The Gestapo would envy the Brits today.

The safety illusion was shattered for at least one family in Wales, when it was discovered that their six-year-old daughter had been stripped and sexually abused by up to 23 schoolmates in a public school on a nearly daily basis for weeks.  Despite claims that the child cried for help, none came or was offered until the story hit the news.  But even after a two-year investigation, school authorities claim that because the perpetrators were mere children themselves - aged six through ten years old - the perpetrators were "victims themselves and wouldn't be suspended." 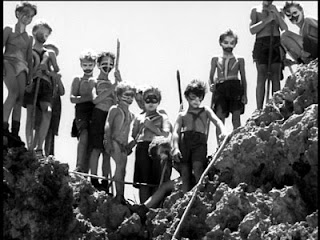 Sorry; but I don't swallow that "perpetrator as victim" nonsense.  While it probably isn't appropriate to put them in prison, those little monsters should be given some intensive reconditioning, beginning with their parent's palms administered to their butts. Otherwise, their abherrent,dehumanizing behavior will only seem to be acceptable in their eyes.  The Lord of the Flies may have been a fictional account but I think it accurately portrays how children quickly degrade into barbarism (just as quickly as adults) without adequate direction and supervision, and without a firm moral basis for behavior.

The Bible tells us to "Train up a child in the way he should go, and when he is old he will not depart from it." (Proverbs 22:6)  It is clear that these kids have received their 'training' from the popular culture instead of their parents.  Unfortunately, fewer young parents are even equipped themselves to teach their children any semblance of real morality.

Hoping for change?  Have you looked up the Cloward-Pivin strategy yet? It has been the bedrock plan for liberal socialist types to wreck this nation's economy since it was implemented in the 1960s. Now, 47% of the population doesn't pay taxes.  In case you're as bad at math as I am, that means about 50% of the people are paying for all the benefits the other half enjoys, as well as paying for all the defense, all the foreign aid, all the pork, all the politicians' perks, and all the national debts and interest on those debts. How do you feel about going to work now?
Posted by Chuck Teal at 9:50 PM