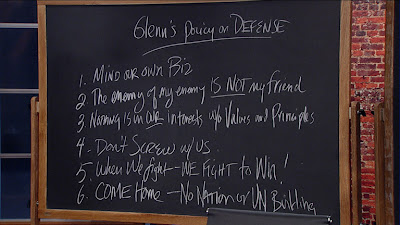 Glenn Beck is proving yet again how well he thinks "outside the box." OK; you may not agree with him (or, as most people do, hate him with white-hot passion), but if you actually listen to what he says, in context rather than the soundbites provided by his disdainers, he actually makes a fair amount of sense. Of course, most of his suggestions turn people off because they are so outside their personal experience or preferences, but that doesn't necessarily make him wrong. This week, he attacks the federal budget, hacking away at things no one else is suggesting. If nothing else, he's fun to listen to. But he's also not quite the loose cannon he's often portrayed as. Consider his discussions regarding the Department of Education and the Department of Defense.

America doesn't have a prayer.  Another activist federal judge has taken it upon herself to further separate America from its heritage. US District Judge Barbara Crabb has decided in favor of the Freedom from Religion Foundation by striking down the National Day of Prayer as unconstitutional.  The National Day of Prayer, first signed in 1952 by then-President Dwight Eisenhower, has been endorsed by every American president - so far.  In an age where most Americans are no longer taught American history, and law schools no longer teach the United States Constitution as the law of the land (unless it is convenient to their agenda), it's probably no surprise that this judge appears ignorant of the actual content of that inconvenient little thing we like to call the First Amendment. It states, in part, that "Congress shall make no law respecting an establishment of religion, or abridging the free exercise thereof." Funny how that latter part seems so often forgotten. 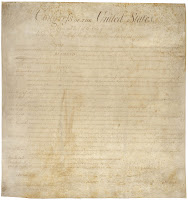 If this were taught in the context in which it was written, there would remain an understanding that, (1) it only bars the US Congress - not the states, nor municipalities, nor presidential directives - from passing laws either favoring or inhibiting religion.  Any religion. While that will disappoint or infuriate some (for example: allowing "free exercise" for satanists is abhorrent to Christians such as myself), it goes to the essence of liberty, which implies equal standing before the law as long as no one is transgressing against another.  (2) "...an establishment of religion" was an inferred injunction against preferential treatment of a particular sect or denomination, not a de facto prohibition against any. (3) It declares freedom of religion, not freedom from religion, as the name of the plaintiff clearly states. Simply put, the judge had no authority to strike down this presidential Executive Order, at least no on the basis of the First Amendment.

Selling their souls.  Do you ever read those ponderous terms and conditions statements before clicking "I agree" to download a computer program?  More than 7,500 people did not when they bought a game from a British company, only to later learn that they had inadvertently signed away their "immortal soul."  In all fairness, the company, Game Station, did it on April Fool's Day, and claim they did it to prove that most folks never read what they're signing. Or, that's what they'd like you to believe. You can see for yourself by looking way down in the "Orders for Sales & Purchases" section.  'Till death do us part?

Here's to your health.  It didn't take very long for the horror stories about the impending failure of Obamacare began to trickle in. One of the early entries is the story of Diana Smith, a young single mom cancer patient in Florida who has gone through six months of painful chemotherapy in preparation for a transplant. Then she made the mistake of responding to an unsolicited offer for her three-year-old son to receive Social Security disability payments.

As you might expect, Diana took the bait and signed her son up for the assistance. Less than a month later she was told that the benefits put her over the new government threshold for the Medicaid universal medical coverage policy, thereby making her ineligible for insurance. The hospital where she was receiving her care then considered the liability risk too high, and refused to help her finish her treatment or provide the transplant. Although she was willing to cancel her son's coverage, the SSA told her it was too late. According to CBS4 in Ft. Lauderdale, "She's gone through six months worth of radiation and chemo, her body can't take any more. If they don't allow her to have this transplant coming up right now next week, they're in effect signing her death warrant," said her friend Tom Noonan. Sounds almost like a 'death panel', doesn't it?

But wait; there's more! Almost as soon as this story hit the airwaves the government stepped in to save the day and forstall the bad publicity. Amazing coincidence, huh?  Will the government respond as well to all the other horror stories that may emerge? Time will tell.

How'd that happen?  There is an unexpected silver lining to the passage of the healthcare bill, though, of a sort. It turns out that Congress may have voted away their own high-end health insurance. Apparently those who voted for the healthcare bill didn't read...er...realize that, according to the Congressional Research Service, "the law may remove members of Congress and Congressional staff from their current coverage in the Federal Employees Health Benefits Program before any alternatives are available."  Even the New York Times finally seems to be catching on to what has been foisted onto the American public, asking the question that should have been on the front page from the getgo: If they did not know exactly what they were doing to themselves, did the lawmakers who passed the bill fully grasp the details of how it would influence the lives of other Americans? The choices are either "obviously not," or "yes, but it didn't matter."

The worm within.  Andrew Breitbart has broken some important stories over the past year or so. He recently learned that a group of wannabe saboteurs was planning to disrupt and discredit the Tea Parties by infiltrating their rallies and trying to artificially induce some politically embarrassing moments. The plan was to use tactics that might "exaggerate the group's least appealing qualities, [and] further distance the tea party from mainstream America and damage the public's opinion of them," according to chief malcontent Jason Levin. A middle-school teacher from Oregon, Levin has been suspended while the school district investigates his radical, disruptive political behavior. Even the liberal locals think he crossed the line, and that with his apparently dim view of the First Amendment rights of other Americans, he may not be the best role model for young people.  Ya think?

Of course, by announcing his proposed tactics ahead of time, this malcontent actually provided a built-in excuse; in the event that some Tea Partiers did go rogue, they already had an alibi. Any untoward activity could simply be attributed to Levin and his 'hobby' disrupters. Way to go, boys!

Favorites reflect no favoritism.  In a decision sure to short-circuit Demoncrat accusations that the Tea Parties are nothing more than Republican flacks, the Tea Party Express surprised many with its endorsements of several political incumbents and candidates, including one Democrat, Rep. Walt Minnick of Idaho. I believe this may be the surest sign that the Tea Parties are on the right track; supporting principles over personalities.