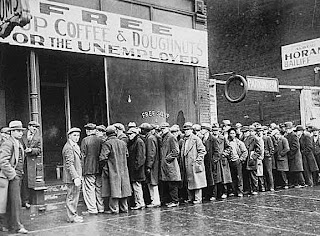 The Holy Bible states that "If anyone will not work, neither shall he eat." (2 Thessalonians 3:8) Furthermore, "But if anyone does not provide for his own, and especially for those of his household, he has denied the faith and is worse than an unbeliever" (1 Timothy 5:8).  That was one portion of Scripture which has stood us in good stead for more than a thousands years, but is now being purposely blown away by the winds of secular selfishness. Plainly stated, our culture is becoming one of laziness, selfishness and corruption; in great part produced and encouraged by our government. This is the opposite of folks in the Depression era, who took pride in honest work, and who were made to feel humble by the forces of progressive government and corporate policies.

What other lesson can you take from the fact that the government is literally paying unemployed people not to find work by crippling (mostly smaller) businesses. It's a system working hand-in-hand with the welfare society mega-scam. The latest extension to the unemployment benefits is, I believe, yet another tactic (made necessary by generating a hostile business environment) to push us closer to full-scale societal breakdown. Such chaos would provide a perfect opportunity for fundamentally changing America.  Of course, if you ask anyone in government, they'll tell you you're crazy, but think about it.  This is hardly a new concept.  For decades, goverment subsidies have paid farmers not to grow crops, in an effort to artificially control food prices. In fact, price tampering has put the vast majority of small farmers out of business, or dangerously close to doing so, conveniently paving the way for agricultural conglomerates to reap the harvest and the profits.

Why won't government get out of the way and let the market decide, especially when it is using essentially confiscated taxpayer money to bribe farmers into laziness?  Along with the destruction of the independent, privately-owned agricultural sector, there is also the aforementioned welfare program which has created generations of dysfunctional families, hugely contributed to drug and alcohol abuse, child abuse, juvenile delinquency, abortions, the spread of sexually-transmitted diseases, the rise of a culture of violent gangs, and of course, crime.  It turns out that "free" money actually costs quite a bit - and not only to the taxpayer.

How are all these things related, you ask? One connection is the simple fact is that people need a sense of purpose in life. If it isn't a positive purpose - such as creating a good product or supporting a family - people tend to become unhappy; and that unhappiness quickly moves beyond mere discontent to frustration, then to resentment, then to anger, and too often, to violence. Government often remove that sense of purpose. Rather than feeling like a productive member of society, the welfare recipient becomes the equivalent of a Pavlovian dog, sitting on the couch until the bell rings (usually on the 1st and 15th of the month), and then bellying up for their beggin' strips, garnering no life-skills, and becoming totally dependent on Uncle Sugar Daddy.  Just because the government is paying some of your bills doesn't lead to happiness or contentment, other than the temporary and superficial type that fills a fat but empty stomach, and tuning in to Oprah or the soaps on your welfare check-bought flat screen TV.  And the only duty you have is to vote for the party that rings the dinner bell.


Silence isn't always golden. It is a curious thing to watch the increasingly brazen socialist Left, which has always railed against conservatives as being Nazis (National Socialists) and thugs, rapidly turning into Nazis and thugs as they try to shut down the voices of Americans who are unwilling to sit on their hands while their country is turned into a real dictatorship. The clamor to discredit the Tea Parties should be evident to anyone with even half a brain that there is a real battle of oppression going on.

As I noted previously, while conservatives will at least try to defend their positions with Reason (sometimes, but perhaps unrealistically called common sense) - and incidentally are not calling for the silencing of their opponents - the Left swings heavy-handed toward making the Right (or more accurately, the Center-right) the target of an intensive propaganda campaign to discredit us. Their position is typically based on idealistic, unrealistic expectations that they can change human nature, which they perceive as being basically good, kind and selfless.

Unfortunately, most of their supporters (and I'm giving them the benefit of doubt here) never think their position through to its logical conclusion, nor do they take into account the reality of human nature.  When, in all of human history, was there ever a culture in which the baser nature of humanity did not perpetrate all sorts of inhuman deeds or practices, or did not need to be restrained by force?

The difference between the utopian view which requires the external force of the police state, a genuine Christian culture - if we were to establish one - would restrain its baser nature internally. After all, you might be able to hide your sins from the eyes of man, but you cannot hide anything from an omnisicient, omnipresent, omnipotent God. We've never been perfect as a Christian nation, but we used to be a whole lot closer to it than we have become.

Happy Earth Day!  Doesn't it give you a thrill just to say it? Oh, to sing the praises of our sacred Mother Earth!  Ugh...I think I just threw up a little in my mouth.

That segment of global society whose unthinkers (as opposed to non-thinkers) worship a big ball of rock and dirt flying through space but ignore or blaspheme Him who actually created it all, may be entering a period of stunted growth as more information (that is actually based in facts) comes to light. No thanks, of course, to the news media outlets used by radical environmental groups to promote the false (in the sense that it is based on nothing substantive, sustainable or supportable) religion of Gaia-worship.

For a long time, Christians have taken it on the chin by the environmentalists, even though Christianity is built upon the Creator's own guide to us for human survival and happiness. But it's incredible to stand back and watch millions of people rave apoplectic over trees and critters of all types, yet show total disregard for their own species' survival. I've wondered how the most adamant vegan tree-huggers - who complain bitterly and do all they can to inhibit any qualtitative improvement on the human condition - would fare if they actually got their way, despite their deeply flawed 'science'.

What if, for example, the oil industry collapses - taking with it the chemical, pharmaceutical, plastics, and energy industries that are absolutely dependent upon that slippery black gold? What if the coal industry suddenly grinds to a halt, resulting in a crashing power grid unable to compensate for the loss of nearly half its assets? What if the lumber industry, unable to cut trees (which they diligently replant inn order to sustain their business interests), combined with the other failures mentioned, brought an end to the construction of new homes?  Would there be enough caves for these true nut-cases to live in (somehow I don't think they'd be too concerned about the rest of us)?

Taken to the nth degree of absurdity in their fawning lust for all non-human forms of life, how do they justify in their own minds the savagery of their food urges taken out on poor, defenseless little plants? Don't plants have feelings, too, in their ever-evolving "the Force is in all things" philosophistry? Honestly, they need to get a firmer grip on reality before they push their environonsense upon the rest of us. Christianity has infinitely more actual Reason behind it than does the globalist green squad, yet they presume their own superiority over us. Useful idiots come in many flavors, as their veiled masters on the political Left would attest if they were prone to honesty.