It's been said countless times; a nation that forgets its past has no idea where it is headed. After decades of a decidedly leftward run in public school textbooks, the Texas Board of Education finally took a stand in trying to restore some balance to what is going into the heads of students. After a hotly-debated battle over what to include and what to exclude in history textbooks (during which most of the liberal members got up and left in frustration), conservative members of the board decided to unrevise the stories that marked the growth and progress of America.

Why is this case so important? Because Texas is the largest buyer of schoolbooks in the nation, schoolbook publishers pay particular attention to what Texans want in them. Most other states follow the Lone Star State's lead and buy the same editions, because it would be prohibitively expensive to produce a special edition geared for each state. Therefore, where Texas leads, the country's schools follow.

At least in the foreseeable future, it is likely that students will finally get a fair chance again at learning about the positive aspects of our history as well as the missteps. Instead of concentrating on marginal characters and leaving out some of our more important historical figures, kids will once again find heroes to look to for inspiration. Some of them may even learn to love America again.

Militias rising!  Do you remember the 1990s when Bill Clinton was trying to turn this nation on its head in regard to traditional values?  "Don't ask, don't tell" was his opening shot across the bow of tradition, in the first days of his presidency. Meanwhile, Hillary was trying to take us to national healthcare with her secret committee, and they were poking holes in our national security while making secret deals with the Chinese. In response, patriotic Americans who refused to just sit on their hands and watch the country turn into a giant gulag began to join together with like-minded people to reincarnate an old national concept - the militia.

Stemming from the experience of the French and Indian War and becoming more earnest at the outset of the Revolution, militias were made up of "all men between the ages of sixteen and sixty" who would bring their own weapons, muster together under a duly elected leader (often the local pastor) and prepare to repel anyone daring to encroach upon their communities, including one memorable incident at Concord Bridge. Militias were the backbone of the early Continental Army.  The modern version got a black eye and severe government attention during the Clinton years; unfortunate and disastrous episodes such as Ruby Ridge, the Branch Davidians, and the Oklahoma City bombing gave the Left plenty of 'ammunition' with which to paint all the militias - most of which were peaceable yet prepared, and yearned to serve as a backup to police and emergency services in their communities - as nothing more than domestic terrorists.

Now it's the Obama malAdministration that is using the militias as a 'whipping-boy'. After the recent arrests of a group which had allegedly been planning to ambush cops and sow chaos, the government is once again ratcheting up (or at least, doing nothing to downplay) the tension in the State-run media outlets. The militia 'boogey-man' has become a standard device for portraying conservatives as extremist whackoes, even though the Left has a pretty strong history of violence as well. There are crazies on both ends of the scale, and it is all those folks in the middle who seem to always have to bear the scars and carry the resulting burdens.

Oh, good Lord!  For those who may not know much about Christianity, this weekend marks the holiest days of the Christian calendar. Good Friday (I've never been able to completely swallow that description, even though I understand why it is called that) is our celebration of the darkest day in human history, which turned out to be the brightest; the day of redemption for all who believe.

After three years of preaching, Christ (not His last name; His title: "Anointed") Jesus entered Jerusalem amid the equivalent of a ticker-tape parade during which citizens lined the road and waved Him on with palm fronds (in a similar manner to modern sports fans waving on their teams with huge foam fingers). The reverie would be short-lived, as the people - inflamed by local leaders with an agenda - would turn against Him the very next day.

That evening He shared the Passover meal with twelve men who claimed to be his closest friends. But He was betrayed by one of them while praying in a local park, even though He knew in advance what would happen. All His friends ran off when the storm troopers and the traitor arrived to arrest Him, although one put up a fight until Jesus stopped him and even healed the soldier whose ear he cut off.  Jesus was taken away by the prototypical jack-sandaled thugs, falsely accused by His own countrymen, abandoned by those who said they loved Him (even His best friend wouldn't step up to defend Him in the mockery of a court), horribly beaten and tortured by the occupation forces, publicly humiliated, and although innocent, finally crucified between two ordinary criminals. He suffered on the cross for three hours before mercifully giving up His mortal coil.  A wealthy sympathizer begged to recover His corpse, and donated his own unused tomb to lay Jesus' body in.  His friends gathered together afterward secretly, because they were now on the 'most-wanted' list.

Now, here's the good part.  On the morning of the third day, Mary Magdalene and other women followers went to the tomb to annoint His body with various herbs, as was the custom. But to her astonishment, the tomb was empty, the heavy stone cover had been rolled away!  Then two strangers standing nearby told the women not to weep, and when Mary turned around, there stood Jesus, risen from the dead!

After Mary told the others - and of course, they doubted her - Jesus appeared before them all in their hideout, even though He never came through the door. As you can probably imagine, the shock of seeing Him alive was intense, and one was even skeptical until Jesus told him to put his fingers into the nail wounds and the spear hole in His chest.  After spending time with His friends, Jesus ascended into the sky to join His Father as Ruler of the nations and the Redeemer of mankind. 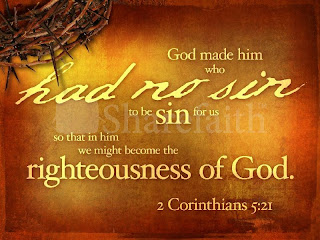 To most people who aren't Christians, it's an interesting story, but they can't quite put their finger on what it is all about.  Jesus is one aspect of the Triune God, just as the Father and the Holy Spirit are the other aspects. How does that work, exactly? I dunno; it's a mystery.  But just because you may not be able to personally witness or understand something, doesn't necessarily mean it never happened or doesn't exist. That's where faith - "the substance of things hoped for, the evidence of things not seen" - comes in to play.

From the very beginning, when Adam and Eve broke the only restriction on their full access of the Garden, mankind has been in rebellion against his Creator. I believe God created man as a type of lesser companion, roughly sort of like fictional superheroes are often portrayed having a generally loyal but non-super sidekick. But because of our inherited rebelliousness, we are forced to try to do everything the hard (ungodly) way, and that gets us into trouble in this world; and because imperfection is incompatible with God, we cannot reside with Him in eternity as we are.  God gave man the gifts of choice and reason (deductive understanding), but we too often choose not to use those reasoning skills, preferring instead to try to satisfy our personal desires - which usually isn't very satisfying in the end.

So, in order to provide imperfect man with a way back to God's grace (receiving favor we could not earn), He gave man an instruction manual for the human race - the Holy Bible - in which He set up a procudure to help man understand the penalty inherent in sin.  But because we continually ignored His written advice, He sent the perfectly innnocent Son to pay the penalty for all of mankind's sins in the only way possible: personal sacrifice.  This is the way He bestowed mercy (receiving less penalty than we deserve) upon us. Jesus - who came to earth for this very purpose - paid for our sins with His own life, because we cannot earn our way into Heaven. But because sinners (everyone who shares in Adam's crime) cannot enter Heaven, we must adjust our lives to become less an affront to God.  All we have to do is accept His free gift - to believe fully that Jesus went through all that horror for us, and begin trying to live our lives as though we actually appreciate what He did for us.

There it is; the Chuck version of Easter (I prefer the term Resurrection Day) and our hope. I'm not a theologian (and I certainly don't have perfect understanding), but I know that His story is so much deeper than I can explain or that you might be willing to listen to. I only hope this is enough to peak your interest.  If you've stuck with me this long, thanks. And have a Happy Resurrection Day!