Those who won't learn from history...are us?

It's been a rough week for me. I've spent the past few days in a running online dialogue with an ultraliberal ideologue who cannot accept anything outside his own worldview.  On the backside, I've had an even more disappointing disagreement with an ultra-right (in the sense that he's never wrong in his own mind) friend of over thirty years. I'll bet you couldn't guess that both started over the mere mention of Glenn Beck's name.

I've stated before that I am really uncomfortable to keep mentioning a person as though I'm putting him on a pedestal. I just feel that no one else is saying the things he is (at least, in the way he does), or is doing the research he has done, or is connecting the dots in a way that makes sense the way he is doing (for those receptive to it). I wish others were, too; but they're generally not for one reason or another. Beck doesn't play to parties, he doesn't talk hate - except for hateful ideas. When he realized he didn't know things, he hit the books - the actual writings instead of modern unfulfilling digests, incomplete analyses and biased commentaries.

Unfortunately, neither one of my correspondents is open to actual evidence (i.e., listening to the source himself) other than that which they have already accepted, like listening to anything more than a carefully-edited soundbite provided by critics.  They rely totally on the rants of critics who also haven't listened to him, or whose agenda is what Beck is opposed to.  Oh, well; I suppose it's only natural to reject out-of-hand those views that clash with your own.  After all the years I listened to the Left side of history (because there wasn't any objective alternative at the time) I'm pretty secure in the sources I lean on now, too.

And my roof leaks. Sucks to be me.

In case you missed it, Beck's  Tuesday Fox News show was one of his best yet (until Thursday's). Did you know that the Nazi movement was popular in the 1930s - in America? Or that the Communists were openly running political campaigns, and had advisors in the Roosevelt administration? They're among the dirty little secrets our parents and grandparents - and our school history books - neglected to tell us. Imagine what it must have been like for many young Americans to give the Nazi salute in rallies such as the one in Madison Square Garden, and then have to fight the Nazis a couple of years later in Europe?  But this unsavory episode of our history is a vivid reminder that if we refuse to remember the lessons of our past, we will eventually revisit those terrible mistakes. And that time is upon us even now.

The cycle seems to be built into the human psyche.  We allow our selfishness to give us the excuses we need to commit all sorts of crimes against our neighbors, against humanity. The more we're allowed to get away with, the more depraved our crimes become.  After much misery, we are forced to admit what we did wrong, express regrets, and teach our children the right way to behave; but we often - probably out of a sense of shame - neglect to tell them of our own involvement. The children, not quite understanding the relevence to their parents, don't take the lessons as seriously, so it never occurs to them to teach their own children how important the lessons were. As each successive generation gets less information, it becomes increasingly remote and self-interested. Eventually, the grandchildren's self-interest (generated in part by the parents' desire to make their children's lives easier than their own) leads them to make the same misjudgments and mistakes. And the hard lessons must be learned over and over, generation by generation. And millions suffer and die.

Incidentally, if you aren't really sure where you stand in the political spectrum (liberal, socialist, conservative, progressive, libertarian?) try this quick quiz. 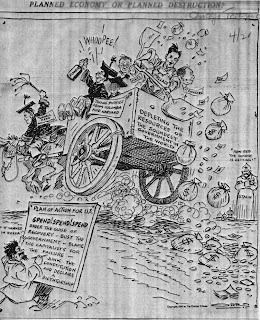 Making it count.  As you are probably aware from the federal government's multi-million advertising campaign, this is the year of the US Census. Your friendly government agent (i.e., temporary help) will be knocking on your door, taking a GPS reading of your exact address and asking you to complete an understatedly detailed profile on you and your family. Before that knock comes to your door, you may want to better understand what your legal obligation really is. While the original draft was a 23-page dossier, massive protests caused it to be pared it down to 10 questions. Most of those questions, they admit, are geared toward enhancing social programs; programs that the Constitution doesn't authorize and which have been misused to loot and waste incredible amounts from the public treasury.  Remember, you're entrusting personal data to an unknown temp who knocks on your door telling you "I'm from the government." Caveat emptor.

The only objective is invective.  MSNBC showed once again that it is the network of bile. Host Dylan Ratigan's interview with Tea Party organizer Mark Williams quickly devolved into a juvenile tantrum with Ratigan stomping off and calling for Williams' mike to be cut off while he was trying to answer obviously antagonistic questions. Meanwhile, these kooks have the gall to hurl insults and accusations of non-objectivity at Fox News.  Insanity has become the new norm.