The Politics of politics

Have I ever mentioned how much I hhhaaate politics? I suppose those who know me think I'm consumed with the topic; but my interest is solely out of necessity; and even then I'm more concerned with principles than with many of the particulars. Because we've allowed politics to either control or influence virtually every aspect of our lives, it is essential that we pay some attention to it if we want to retain any control over our own lives, our communities and our families' well-being. It is precisely because we stopped paying attention years ago that we're in the mess we see today. The longer our apathy continues, the worse it will become; and frankly, our 'window' to correct those things that threaten our way of life (including our liberty) is closing in on us.  What politics is doing to the country I love is maddening, frustrating, and frankly, life-draining.

On the other hand, politics can at times be amusing, ironic, and entertaining. It has certainly been all of those lately as the more draconian contingents of the Democrat party engage in a quasi-Stalineque purge of their compatriots who don't enthusiastically share in their Orwellian vision for America. You may recall how Joe Lieberman was treated when he mildly resisted going along with the radical party elements a couple of years ago. He became so estranged that he eventually went Independent.

The internecine warfare continued as freshly-former NY Rep. Eric Massa hurled verbal hand grenades against Rahm Emmanuel and team Obama, even as he faces charges of making "inappropriate sexual remarks" to a male junior staffer at a party. While he admitted his mistakes, he also levels serious charges against the malAdministration that are just as worthy of investigation. But when given the opportunity to get it all off his chest on the Glenn Beck program, and later on Larry King's show, Massa merely showed the world that he is little more than a loud-mouthed, two-stepping, creepy guy whom all New Yorkers are happy to no longer be paying for (other than his retirement package, presumably).

Hanks is no Yank? Actor/director/producer Tom Hanks made an ass of himself while promoting - ironically - his new WW2 HBO miniseries, The Pacific.  During what must be described as an embarrassing episode of self-indulgent presumtuousness, Hanks accused American veterans of being racists because battle devolved into "racism and terror" and followed that with "does that sound familiar?"

Hanks is a terrific actor and producer, and I look forward to seeing 'The Pacific,' but his callous generalizations are insulting to those who risked and sometimes gave all they had to defend their country and often their buddies. To throw charges of racism without context shows how little thought he really puts into it.

Was there racism? Yes, as there is in every culture, and in every war. But Americans also fought side by side with other ethicities and races, against common and merciless foes. And while the Nazis epitomized a national feeling of superiority, the Japanese embraced their own brand of racism; one that led them to commit unimaginable crimes against Chinese, Koreans, Filipinos, and British and American prisoners of war, in the belief that they were the 'superior' race destined to conquer the world.

American soldiers and Marines often showed compassion, when conditions allowed, for Japanese and other civilians caught in the maelstrom of war, just as their modern descendents often do for the Iraqis and Afghanis who only want to live their lives in peace. Non-warriors like Hanks can imagine the horror of war, but they don't seem to really get a feel for it. The battlefield is not a place you can afford to feel sorry for your enemy, because it will get you killed, really quick. If you survive, you can go through self-examination, or kiss and make up with your former foes. If you're dead, you feel nothing. 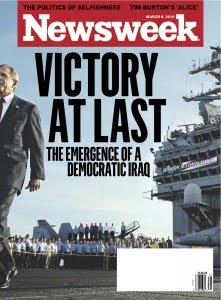 Mission accomplished after all?  It must have been a bitter pill to swallow when Newsweek grudgingly issued a cover story that virtually vindicated George Bush's invasion of Iraq, which he stated at the time was partially for the purpose of planting democracy right in the middle of the most contentious Islamic states.  Bush's critics have assailed his every breath since Day 1, and MSNBC's Joe Scarborough couldn't even muster enough evenhandedness to present this story without a graphic that only shows the ex-President's arm.  Talk about bitter, hateful, small-minded people; MSNBC is the place to be.

But back to the real world; after several years battling terrorists as well as opposing political parties, the still-fledgling Iraqi government is not-so-tenderly treading ground that would probably seem familiar in some aspects to our own ancestors. It's never easy getting millions of disagreeing opinions to agree on anything, but to be able to sustain an atmosphere wherein people begin to see hope for the future is a major accomplishment. Our own Founding Fathers proved that courage, wisdom and persistence can overcome the worst of obstacles. The sight of so many Iraqis proudly displaying their ink-stained fingers amid bomb blasts, drive-bys and constant death-threats from extremists who prefer chaos or absolute tyranny is something that should shame Americans who sit out elections and indirectly cast their vote for the status quo by their apathy.

Have faith!  Speaking of ideological warfare; there is none so volatile as the battle over whose god is God, or if there even is one (there emphatically IS). Other than the battle of atheism versus God, the battle of the God of the Holy Bible versus Allah of the Q'uran has produced the most bloodshed in recent years.  No one knows the dangers of that battlefront better than Muslims who follow their conscience and convert from Islam to Christianity under risk of death; people such as Mosab Hassan Yousef, Walid Shoebat, Abdul Saleeb, and many others. Now, that's courage.

Proof of miracles?  The 9th Circuit Court of Appeals in San Francisco - and I'm still having trouble believing this - actually shot down yet another lawsuit by atheist Michael Newdow by upholding the phrase "Under God" in the Pledge of Allegiance and "In God We Trust" on our money.  Yes; the same Court that has fought against so many conservative-backed cases in recent years.  In 2002, this same court ruled in favor of Newdow when he sued his own daughter's school for allegedly forcing students to recite the Pledge his daughter and ex-wife are committed Christians).

Atheists like Newdow complain that religion is such a burden to them, and that just the presence of religious speech, monuments, holidays or activities is offensive to them. Unfortunately for them, among the God-given (oops) rights spelled out in the Declaration of Independence, the right to be free from feeling offended isn't mentioned. Sorry.

I'm sorry that atheists are offended by a system of faith which defends the poor and helpless, that offers hope in the worst of circumstances and even beyond the grave, and that prods believers to be the best person they can be, for the betterment of all people. But then, I'm offended by a belief system (aka, faith) that seeks personal power above all else, that has no innate respect for life at any stage, that inculcates that the hard and honest efforts of others are yours to be exploited, and that no one else matters except the self, and the State. In this case, it sucks to be them.