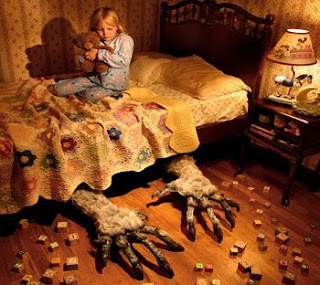 Perhaps you can recall when, as a young child, you slowly become aware of that huge world beyond your parent-provided sense of security. Perhaps you can even remember going through a period of fear and barely-contained terror when Mom or Dad turned out your bedroom light and closed the door after tucking you into bed for the night. That's when the "monsters" started peeking from the closet, and you were sure you heard something slithering around under your bed. Maybe you were too terrified to move, or perhaps cried out for your parents to leave the light on, or convinced them to allow you into their bed. After a while, Mom (usually) would finally convince you there were no monsters and that the ones you saw on TV were fake, and you would slowly outgrow your fears of the dark...and of monsters.
But eventually you grew up, and slowly discovered that there truly are monsters. Some were only a threat if you ventured out into the sea, or in the deep jungle, swamp or forest; places most of us could easily avoid. But with daily doses of the news (if you bothered to pay attention) it finally dawned on you that the worst monsters of all were the ones that shared the same streets, planes, busses, schools, workplaces and shopping malls that you do. You can sometimes tell who is a fool because they generally believe that it is the outward appearance that proves the monstrosity; but in truth, it is the inner monster that is the most cruel, the most dangerous, the most...monstrous.

Sometimes the monsters try to blend in with you socially, invisibly; they hide their inner monstrosity with seemingly innocuous behavior until they cannot restrain it any longer.Sometimes they remain cloistered within communities of similarly-minded but perhaps not quite so vicious social groups who don't grasp their truly evil side until it is too late. Until then, the monster is simply "the quiet guy down the street," or the "woman who kept to herself." 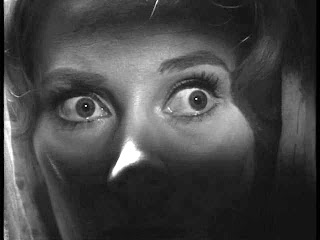 Sometimes, the monsters even rule over us. It might be an abusive parent or caretaker, a belligerent spouse or lover, a mentally-deranged individual, an entire subculture which shares a monstrous vision, or a governnment that doesn't trust the people they pledge to represent and protect. This last type may not be the most obviously horrendous - at least to the majority of its subjects - but it is certainly one of the most effective, because it dominates the largest number of people through fear, and isn't that what most monsters do? 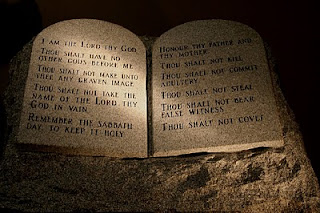 But perhaps the most devious monsters are the ones we refuse to see within ourselves. Each of us carries the potential to unleash terror and horror against those we are closest to, as well as those we meet by chance. Too many of us are "the last to know" about those inner demons that twist us into something unrecognizable, through our insecurities, our fears, our lusts, our suspicions, and our ambitions. One of the most important things to learn in life - the earlier the better - is our responsibility to keep those inner demons at bay, by recognizing them, and restraining them, regardless of our temptations or the provocations of others. Please note, I'm not saying it is easy to do this; I'm saying it is essential to do this. If we fail, there will be literal and figurative Hell to pay for our failure to do so.

While nature's "monsters" are somewhat beyond our control, I think the sheer number of society's monsters might be lowered by a steady reintroduction and constant reinforcement of moral principles. While we can easily get bogged down in the deeper implications of morality, I prefer to distill it down to essentials. From my own perspective, the most essential expression and definition of human morality is through the Ten Commandments.

Sadly, many people will refuse to get on board simply because the Big Ten smack of religion, which for various reasons they reject. The fact is that the Decalogue, as it is called, is the perfect expression for the sort of social and personal restraint which is essential for a civilized societ, if they are kept by the majority of the people.  The first four (keep in mind that the commandments are numbered differently depending on which version you read - I'm favoring the Protestant Bible: i.e., King James, etc.) show us how we relate to God, the Creator. By immediately putting man in an inferior position to God, they serve to keep us humble, and remind us that while we might fool our fellow humans, we can neither fool nor escape a scrupulous, omnipresent and omnipotent God who also happens to be our ultimate Judge. They also illustrate not only why and how we are to worship Him, number four shows us how fair He is by allowing us rest from our labors - it also is an instruction for us as a courtesy we are to show to our fellow man.

The second half of the commandments are what I consider to be the basic operator's guide for the human race. They instruct us how we should relate to each other: to honor and respect those who have sacrificed for us; not to murder each other; not to steal from one another (also an instruction to government), not to betray or falsely accuse one another; and not to plot against another out of envy, either to rob them of substance or dignity.

Even if you don't believe in God (and those doubts, incidentally, do nothing to minimize the reality of His existence), these are great precepts by which an individual or a civilized society should operate: peacefully, honorably, respectfully, safely, and cooperatively.  Isn't that the sort of society you would want to live in: a society without monsters?
Posted by Chuck Teal at 12:05 AM