Words have meanings. That much everyone knows. But we sometimes forget that words can have vastly different meanings to different people and in different contexts. 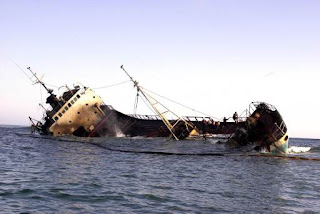 For example, to most people this week's title - "Listing" - simply means being part of a list; one of a number of items, usually with some sort of common denominator. But it also has another meaning that is important. To a sailor, listing ("to list") means to lean to one side or the other. Any seaman will tell you that listing is generally not something you want to experience aboard a boat or ship, because there is a real danger of capsizing (overturning) and sinking once the vessel passes the critical "tipping point."

Our way of life has been "listing" for a long time, and it is now in severe danger of "capsizing."  Our economy is being utterly trashed by supposed experts who are bailing out rather than bailing us out.
I almost wrote that they're getting out because they weren't doing their job, but more and more, it looks like they were brought in specifically to cause damage and confusion. After all, President Obama claimed during the campaign that he was going to destroy the coal industry (which produces about half of US electricity) and drive up energy prices for everyone, and he's following through on that promise.

Speaking of listing; over the past week or so I've been seeing a number of articles that include lists of some of those things that endanger us. Allow me to 'list' a few, and I hope you'll be interested enough to check them out more closely. Then compare what you read to what you see around you, among your friends, in your neighborhood, in the news.

- Top Post-Collapse Barter Items and Trade Skills: http://www.shtfplan.com/emergency-preparedness/top-post-collapse-barter-items-and-trade-skills_06102011
The begining of a new Exodus? Lately there has been an amazing shift from the Left, as a number of surprising personalities suddenly seem to discover that when the rubber hits the road, they are more conservatively-oriented than they once thought. Expressions ranging from near-ambivolence, to gradual realization, to real concern bordering on fear have led people as diverse as a Chicago rapper, a prominent Demoncrat strategist, a playwright/augthor, and others. When reality hits you squarely in the face (or the wallet), your ideals tend to either get confirmed, or adjusted.
Posted by Chuck Teal at 11:30 PM