You may have heard about Glenn Beck leaving Fox News. The blamestream media is all a-twitter and salivating like Pavlov's dog at the looming prospect (in their minds) of a Beck-free forum in which they might continue to slant or omit news that contradicts their personal agendas. Think again.

Those who bother to read this tacky little blog each week know I have used Glenn Beck as a major resource, while others may say that's precisely why they don't read it, because they automatically dismiss any reference to him (an extremely shortsighted reason). People who actually know me will readily tell you I'm a Beck fanatic. But what generally gets left out of that discussion (either way) is why I pay such respect and close attention to him.

Simply stated, no one else with the media footprint Beck has developed over the past few years seems interested in gathering the information, making the connections, or putting this information out there for the public to see. Few indeed even have the backbone to suffer the attacks and personal threats he has in doing so, and I think that risk is why most everyone else avoids the issues Glenn broaches. As a flawed human acutely aware of his flaws, Glenn lives his life with deliberation and integrity, and that characteristic is both the hallmark of his work and an example to others such as myself. 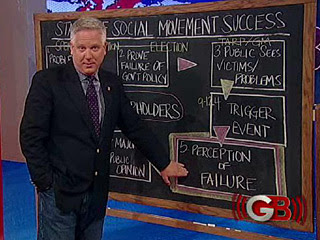 Another reason I have such great respect for him is that he makes a point of not wanting you to believe him on face value. He repeatedly advises his audience to "Do your own homework." He provides the information (and posts the sources so all can judge for themselves), and tells you how he believes certain individuals, organizations and events are interconneted. Then he lets you decide whether or not he is on the right track. His own track record is fairly consistent and accurate, so....

It is undeniable that we live in increasingly troubled times; more so than we have experienced in many years. We are, for all intents and purposes, approaching a 'nexus' of sorts, a coming together in purpose and/or effect of many bad events, triggered by many separate elements all culminating in a common outcome; the collapse of civilization as we knew it. That approaching apocalypse, if it actually occurs, will be the end for the foreseeable future of the comforts we enjoy (because everything will be much more expensive, harder to find, and of lower quality) and the freedoms we have taken for granted.

The fact is there are presently two major philisophical groups vying for control of everything (they don't call it "global governance" for nothing), Statism and Islam. Statists generally are atheistic - but only in the sense that they don't believe in a supernatural force (i.e., God), because to them, a strong central government is their focal point of worship. Islam is also a political system as much as a religious one - it merely uses a merciless, unforgiving entity as it's core of authority. That isn't to say every Muslim is evil, but very many are quietly supporting the larger movement, which is - to a rational person - undeniably evil in its methods and intent. There are very few "moderate" Muslims speaking out against mass murder, "honor" killings, gross maltreatment of women and children, sharia-instituted extortion, or other behaviors, policies and doctrines that only a few years ago (pre-PC) would have been clearly labeled as murder, rape, attempted genocide, and crimes against humanity.

Unleadership.  Once again proving himself to be the singularly least qualified, most undignified president of the United States ever (at this point, even undercutting Jimmy Carter), Usurper-in-Chief Barack Obama has once again turned his back on our troops in the current budget battle by threatening to veto legislation to fund the troops for the remainder of the year, while the rest of the Demoncrats are completely disregarding real fiscal solutions and rallying around funding for Planned Parenthood as their line in the sand.

Does anyone else find it incredible that a group of so-called leaders would be willing to hamstring our entire government over funding for the abortion industry? How depraved and indifferent does someone designated as the people's representative have to be to circle the wagons around maintaining a private organization that derives 95% of its money from our tax dollars, an organization whose gruesome techniques caused the inhumane deaths of 332,278 infants in 2009, or one abortion every 95 seconds? But then, many of those politicians are owned by Planned Parenthood. Between their undying support for the deaths of babies and the elderly and infirm, and their abandonment of our ally Israel as Islam prepares to destroy it, under their leadership we may soon owe an apology to the the Nazis for bothering to stop them in World War 2.

On the topic of serious (but not final) solutions; when it comes to restoring fiscal responsibility to the federal government, it appears that no one has as good a grasp on the topic as Congressman Paul Ryan. He has just released his Path To Prosperity plan that would turn the projected path of government spending us into fiscal oblivion into a return to managed growth and renewed economic vigor.

Nanny Statement.  When it comes to micromanaging people's lives, Nowhere in America does "Nanny State" with as much vigor as New York City. The ruling philosophy seems to be "tax it till it bleeds" and squeeze 'em till it hurts." It began with an ever-expanding restriction on where and when people can smoke cigarettes (something I won't argue with, except for the blatant ignorance of individual rights). Then it moved to restricting trans-fats in restaurants. The latest episode in the Big Apple's current drive to turn every inhabitant into a walking stick figure is happening in the very place that is driving so many other New Yorkers to drink diet booze: the city's Health Department has issued new internal guidelines banning fried foods in its work-related meals. The new rules are so intrusive they're now telling employees to cut bagels and muffins in half - I don't know how long they have to wait before eating the other half.

How much more of this government micromanagement must we take? Are the current powers-that-be really trying to provoke a violent reaction for the purpose of nullifying the Constitution and suspending the Bill of Rights so they can instill a true police state? I really don't know when we stopped being a country of truly free people, and became a society merely under the delusion of freedom. The majority of this generation cannot express the difference between liberty (which implies a counterbalancing personal responsibility for one's actions) and license; between self-rule and self-indulgence. Each successive generation will understand even less of the differences because each generation is taught less about what is expected of them in a free society, and taught more of what they should expect from government. They don't know the difference between capitalism and communism, so how can they be expected to defend what our nation used to stand for?

In the span of a single generation, we are reverting from history's most noble social contract to history's standard paradigm of the caste system, with its protected and privileged ruling class at the top, the tolerated merchant/artisan class in the middle, and the worker drones and poor peasants (the welfare class - those capable of work but disincentivized to look for it) at the bottom. The middle class will be allowed just enough privilege to keep them fairly content, and in turn they will see to the needs of the upper class. The lower class is controlled by the upper class and perpetually "managed" through the manipulation and induced limitations of food, energy, travel, communications, education, opportunity and reproductive rights. The workers at the low end will provide the 'mindless' labor needs of the society, working in the fields and factories, picking up the trash and cleaning the homes of the wealthy.

As long as the facade of representative government is maintained, a sufficient population of welfare-dependent poor people will be allowed to remain, to provide a sufficiently loyal voting pool. This has been the Demoncrats' modus operandi since the mid-1960s, with the  Cloward-Piven welfare strategy. I say "allowed to remain" because it is, after all, the party of eugenics. It is, after all, made up of the same group of radicals who during the early 1970s bombed and murdered across the country, and plotted the elimination of 25 million Americans who wouldn't go along with them in "reeducation centers" to be located in the Southwest (incidentally, there now are such centers waiting for occupancy).  Keep in mind that they have stuck to the rest of their plans since that time, so why discount their willingness to go that far?).  Why else are the most and largest Planned Parenthood abortion centers located in urban areas with large minority populations? Why are black babies the most frequently aborted?
Posted by Chuck Teal at 12:37 AM