Spirit of the times?

﻿ ﻿﻿ Has Hell frozen over? That's the question that comes to mind when one of the leading 'moral' figures in the world today opened the new year with a call for a new global world order to enforce draconian regulation over the world's economies, populations, the environment and other essentials of life.  But that's exactly what Pope Benedict proposed in his latest encyclical, in advance of the G8 meeting.

On his 'wish list' were things that would almost make Obama proud to convert to Catholicism, including more power for trade unions, a new economic system "aimed at the common good as well as profit," would "protect the environment," and of course, it should be "given power to ensure compliance from all countries."  Hey, what's not to like? Shudder.

Curiously, the pontiff seems to be generally in line with the usual Leftist suspects and other progressives, who call for a "new world order," even if it takes blood in the streets. The call for disruption and violence is becoming louder and more prominent, especially among the university 'intellectuals', union agitators, social activists, and anarchists.  Isn't it strange that some people will purposely inflict suffering on entire societies just for the chance to bring about their perverted vision of Utopia, in which, coincidentally, they would all (except for the ruling class, of course) end up suffering even worse, and permanently?

There's a new mood in the new Congress, at least in the House. As a wave of fresh blood - and hopefully, fresh air - takes their seats and exercise their portion of the reins of government despite the expected Demoncrat interference and obfuscation, all conservative eyes are looking toward the dismantlement of Obamacare with breathless anticipation. Liberals are looking at the possibility too, but with a slightly more melancholy tenor.

Somewhat incredibly, the looming battle to rid ourselves of this legislative blight may hinge on a 1942 Supreme Court decision that robbed a farmer of his freedom to produce for his own family's needs.

In the scheme of things.  OK kids, it's tinfoil hat time! Seriously, though, while there is plenty of stuff here that we really should think about, overthinking can lead to real psychological paralysis.

Everything around you is part of the grand conspiracy? What do you do to escape it? Jewish conspiracy? Secret brotherhoods? We're in the end times? Christianity is the only real answer (actually, yes)? Oh, wait, Jesus was a Jew. Islam worships the moon god,  Fabian socialists are actually Freemasons, yada, yada. Want a logo for your organization or company? Make sure you don't incorporate the wrong symbols, even in convoluted or accidental design configurations. Make it all stop!

I've been down this road before, long ago. I actually do believe there are conspiracies, because history has proven they exist. George Soros and his ilk certainly believe in them; they perpetuate and execute them. The quest for power is one of the certainties about the human condition; it's a matter of what level of power one seeks, what they intend to do with it, the methods they are willing to use to acquire it, and their ability to achieve it.

Actually, most of the biggest conspiracies aren't really all that secret; it's just that most folks aren't paying attention, or they are too easily distracted from believing what is happening virtually right in front of them might actually be true. In fact, if you pay close attention to what those on the Left are actually saying, they will tell you, for example, in their own words, that much of the so-called 'green movement' is merely a pretense for the advancement of their socialist agenda and the destruction of the western economy and way of life.
The thing to keep in mind is to try to be aware; don't summarily dismiss the possibility that those vague fears might actually be real, but keep your hope alive. That "Jewish carpenter" is also very real, and unlike the others, He offers the hope we really can count on, if we keep faith with Him.

Oil's not well.  If one of the president's Christmas wishes was to bankrupt the United States, he must be a happy camper, with the news that more of the deep-water oil rigs presently sitting dormant in the Gulf of Mexico are getting ready to move to other areas, including the North Sea, where their revenue enhancement capabilities will seemingly be more welcome. Since Obama's ban on drilling two months ago under the rubric of "environmental safety," most of the rigs have been virtually dormant, sucking the money out of the drilling companies, and sucking the life out of coastal economies.

Wait a minute; Obama just signed an order to allow drilling again, didn't he?  After months of protest and the Dems' loss of the House, yes; but it still isn't certain if most of the rigs will stay in the Gulf; and besides, this malAdministration has proven in the past that it operates under the unspoken credo of "That was then, this is now." According to an article in the LA Times,


"The pattern we've seen again and again is that the Administration makes an announcement when they're under the gun," an industry official said, "but then there's no change afterwards."

The oil industry's political allies were also guarded. "While we welcome in principle the Administration's stated intent to put these 13 deepwater drilling operations back to work, I'm not yet convinced this is entirely good news for Louisiana's oil and gas industry. We need to know more about the conditions under which drilling will be allowed to resume and make sure those conditions don't actually undermine the intent, said Louisiana Sen. Mary Landrieu, a Democrat.

Of course, this fits right in with what by all appearances is a grand plan (hmmm...where have we heard that before) to bring America to its knees. Even as our economy is dismantled, our military strained, our freedoms curtailed, our dignity outraged, and our infrastructure crumbles, this malAdministration is intentionally robbing us of the very resources that are essential to any prospect of restoration and continuation.

And yet, hope rises.  So that it cannot be said that I'm all about doom-and-gloom (alright, it's still going to be said), let it be known that there actually are bright moments of sunshine in an otherwise depressing observation. For instance, the Obama malAdministration has beat a retreat from the 'death panels' aspect of Obamacare. 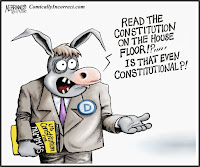 Also, in the "why hasn't anyone thought of this before" department, the 112th Congress opened with the first full reading of the US Constitution prior to opening legislation. Despite the juvenile heckling from Demoncrats and two of the new Republican lawmakers playing hookey during the swearing-in, it was an historic moment.
So the question comes to mind, why has no one thought of doing this before? I think it's only reasonable for those who take an oath to uphold and protect the founding document should have at least a passing familiarity with it. What about you?

Long, long ago, in an America far removed from the country of our time, public schools actually used to teach the Constitution and the Declaration of Independence. No, really! It was taught in special classes called "Social Studies" and students were instructed in the basics (and sometimes more) of what used to be called "Civics".  Unfortunately, these lessons are no longer taught, and lawmakers over the past couple of generations have increasingly gone beyond the boundaries envisioned by the Founders of this nation. Let's hope this revival will be a permanent one, and that its positive effects will spread to the rest of the culture. Perhaps it might even return to the classroom.

Whoa! Imagine a future America where virtually all citizens were well-versed in the foundational principles of our government, once again believed in the American Dream, felt patriotic because they believe their country is noble, and felt it was their duty to be aware and involved. While that may sound like a fantasy to the millenials, Gen-Xers and whatever the next batch of self-absorbed little snots may call themselves, that is precisely how a majority of Americans used to think. And the only hope of a brighter future is for that line of thought to be bred back into generations to come.