While coming home from work the other day I noticed the vanity license plate on the car in front of me read "HEATHEN." My first impression was, why would someone broadcast that about himself?  But then I mentally slapped myself upside the head and remembered that we live in a nearly post-Christian culture.  Too many people today are so full of themselves that they actually take pride in such eternal and infernal arrogance.
Let me begin by addressing the heathen; a term which I take to include atheists, Gaiaists (Earth-worshippers/tree-huggers), Wiccans, and communists - by whatever name they identify themselves: socialists, nazis, facists, progressives, Fabians, statists, etc. Essentially, anyone who doesn't have some belief in monotheism (Islam, while monotheistic, is for another discussion). Heathen typically take joy in the belief we're post-Christian partly because the Church - Roman Catholic, Presbyterian, Baptist, etc. - has seemingly lost so much influence in today's culture, in their opinion. They also see so much anti-Christian animus - let's call it for what it is: bigotry - that they naturally assume their side is winning. Even if true, it would be a Pyrrhic victory, at best. 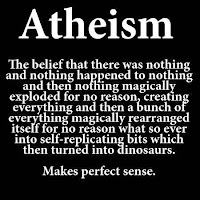 The heathen see church leaders and professing Christians taken down for various acts of criminality or generalized decadence (completely missing the difference between people who call themselves Christians, and the actual principles of Christianity - which are a pretty high bar by typical human standards); they see the culture being degraded in every area - and not only do they contribute to that degradation they applaude it, unless it hits home for them, personally. And then they cry "victim."  They see Christianity and the faith belittled, impugned, and held up to ridicule by most of the entertainment media; they hearand repeat unthinking blasphemies every day that has become de facto acceptable speech and never think twice about it. They join in in almost subconsciously, and "post-Christianity" thus becomes self-fulfilling prophecy.

In fact, the general public hears less and less of things favorable to Christianity, precisely because there is an active push to erase that huge portion of our history and heritage. Because the teaching colleges are hostile to the faith, most of those who graduate and take their place in your children's classrooms are also hostile to it or ignorant of it. History books are being rewritten with the intent of marginalizing Christianity (pseudo-historian and textbook author Howard Zinn comes to mind), along with any other positive aspects of our national heritage. It has only recently been "rediscovered" that so much of our history, written and taught by Progressives, has all but removed any positives of Blacks in early America (also here, here, and here) before segregation was reintroduced in the early 20th century by Democrats. Now, for the first time in our history as a nation, we have a man posing as president who has virtually declared war on all things Christian and all things traditionally American, and who has unflinchingly favored a religion adamantly hostile to, and diametrically opposed to all that Christianity stands for. 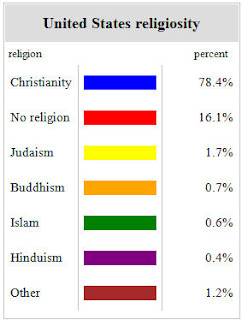 Christianity in America may be down in some ways, but don't ever count it out. Although church attendance is  down from say, fifty years ago, Christianity is still the major religion in the US even if most of those who claim it know little about it, other than they "believe in God." If anything can be said about the Church in general, it is that so many churches have been infiltrated by agenda-driven marxists determined to undermine their doctrines. But there remain uncountable indications of Christianity's influence on America. From examples of architectural embellishments, to artwork, to literature, there are many examples of the part that faith played in the formation, development and maintenance of the Republic. Perhaps some of the least-recognized examples are organizational in nature. How many hospital names are prefaced by "St." (Saint)? How many people have been helped in times of need by various Christian-founded charities, or spent time at the YMCA or YWCA (guess what the "C" stands for), or been helped by the International Red Cross or the Salvation Army?

If you dig deep enough in our now-biblically-illiterate culture, you might realize that the best features of our national heritage are in fact gleaned from our Christian roots. From the innumerable examples of biblical influence on the language, to our deserved reputation (until the past couple of years) as the most charitable nation in the world, to the influence of the Bible on our early laws and Constitution, it takes nearly conscious effort to not realize that as a culture, we have been benefitting from the residue of our religious heritage even as we drift further and further from it. Of course, the Left and its dedicated "heathen" are trying as hard as they can to remove every vestige of the faith from our memory.
On the other hand, what do the "heathen" and "pagans" offer? Unbridled self-interest, unrestrained hedonism, the worship of wildlife and plants over human life, the skewering of all traditional values and virtues (such as earning what you get instead of being "entitled" to something at the expense of someone else's efforts).  Generation "gimme" is about to take center-stage; but when entitlement becomes the majority view, who will do the labor? The one thing that seems to escape the ravenous appetites of the welfare mentality is that eternal truism: there's no such thing as a free lunch. Yeah; there have been dark episodes under misguided Christians or outright charlatans who misused scripture to justify their particular aims, but generally, these have been corrected over time. Even amid the slavery tragedy of this nation, Christians were instrumental in eliminating it, even in drafting the Constitution. There will always be a slave class under socialism because it cannot survive otherwise.

Of course, any mention of religion in American life has to be tempered by the reality that there has always been dissent and opposition; between denominations, congregations, and atheists. And each person should have freedom of conscience insofar as it doesn't willfully impose itself on another who isn't interested. But on the whole, much of the American fabric of life is tightly interwoven with the faith that preaches and promises salvation and eternal life through belief in the sacrifice of our Lord Jesus Christ. And that's so much more than the promise of the nilhilist non-believers, and those who think they'll be reincarnated as bugs or other critters.

A Giant In The Making
Exercise your entrepreneurial muscle and
work from home. Come join me today. This
business is hitting the Internet like a storm
front. It's a GIANT of an opportunity that
you don't want to miss.
http://www.neweconomysolution.com/pat
Posted by Chuck Teal at 7:20 PM