The Other Big Wave 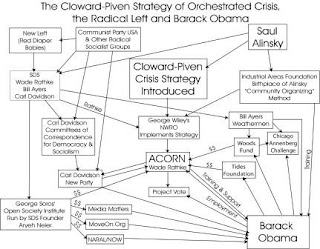 If you haven't already heard (and you probably haven't if you get your news the vast majority of the blamestream media), Glenn Beck's own news site, The Blaze, followed by the Business Insider, has broken yet another potentially huge national story. It seems that last weekend, former SEIU official Stephen Lerner gave a talk at Pace University in which he outlined a plan to disrupt, overwhelm and collapse the US banking system, Wall Street and the NY Stock Exchange, and pin the blame on JP Morgan Chase. If what Lerner said in this public forum isn't at least seditious or outright treasonous, I'm not sure how you would define those terms anymore. And apparently, most media outlets don't either, because the sound from the usual talking heads (including, so far, even Fox News) you're hearing about this story are overridden by the sound of a pin dropping. Thankfully, at least one congressman had the courage to seek an official investigation. The question is, will this malAdministration respond to his request?
To be clear, I have no particular allegiance to, or particular fondness for any of those financial institutions. They are, however, to varying degrees crucial for the exchange of goods and services in this country, and I would venture to say that virtually every American - as well as our interdependent world - has a stake in keeping the economy going. If you're working, you want to be able to keep working and buying those little things in life like food and fuel.

Even if you're a human sponge who could work but refuses, instead living off the backs of the taxpayers, you still depend on the system working, because government doesn't really create anything other than red tape and problems.  And if the economy collapses like these ultra-Left goons want, before too long welfare coupons are going to be replaced with whips, involuntary work parties and soup lines, so....support your local evil rich bastards.  You know; those men and women who take the financial risks building businesses that provide jobs, so workers can pay taxes that make your life of relative ease and nonproductivity possible, and whose companies make the things you're so fond of having without earning.

Oh, does that sound harsh? Try earning a living and then having a big chunk of your earnings taken from you by force of law and given to people who laugh at your stupidity for working. Now, that's harsh.

Deserting principles.  ﻿Thousands of miles away from the disaster in Japan, another catastrophe is occuring that also has the potential to affect life well beyond the borders of the nation in which it is focused.  ﻿﻿﻿The second tsunami that is presently happening in the world is the wave of uprisings throughout the Muslim countries of North Africa and Southwest Asia.
The recent attacks by Western powers, ostensibly in support of Libyan rebels, has opened up a new can of worms for the US in particular, because it highlights the current schizophrenic character of the nation and especially the malAdministration.
Surpassing even the expectations of most on the center-right, President Obama has succeeded in pissing off both the Left and the Right;, and the farther from the middle you get, the more outrageous the reactions. In Congress, both sides of the aisle were taken aback by Obama's flippant disregard for his limited constitutional authority and the end game. But when you essentially command the entire government and get most of your dirty work done by bypassing the checks and balances through Executive Orders and regulatory maneuvering, and are in cahoots with some of the most powerful unions and power-hungry billionaires in the country, I guess you can afford to be flippant.
At this point in the play, the final act has yet to be determined, but the costs of Obama's War are escalating even faster than his incomprehensibly unwavering knack for finding new ways to drive up our consumer price index. After all, cruise missiles don't come cheap (at $1.5 million a shot), and we're expending a lot of our inventory in this new intervention. Fortunately, within the past day Obama has been looking for an "exit strategy" to offset his warlike presidential pretensions.
Donald Trump asked some pertinent questions earlier this week in context of the recent flurry of Islamic revolutions: Western nations (mostly the US, Britain and France) trained and equipped the Arab nations' military forces, which are used mostly for show and suppression of their own people. If the Arab League wants us to do their dirty work for them, why aren't they ponying up to cover our costs? Of course, the obvious answer is that the sheiks, kings and other puppet masters in the region don't want to inflame their own hair-trigger-temperment peoples any more than necessary; and besides, why get your own hands dirty when you can convince those gullible westerners to do your dirty work for you and take the blame?
I can't help the feeling that we're being conned yet again. The whiners of the League conveniently put away their distaste for dealing with powerful women and enjoined Secretary of State Hillary Clinton, who in turn apparently convinced the Empty Suit in the White House (on yet another foreign "Let's push the US further into energy dependence and poverty" trip to Brazil at the most critical time) to interfere.  I think our intercession into Libya is doing little more than furthering the Muslim Brotherhood's goal (assisted by communists) of expanding their foothold and ripening the field for their dream of a regional (and eventually global) Caliphate.
﻿﻿Animal Farm.  A lot of news time - too much time, actually -  has been taken up in recent weeks chronicling the gross misbehavior of what are baselessly assumed to be young adults. An epidemic of sporadic fistfights, bar fights, spontaneous riots and the trashing of family restaurants has demonstrated to the viewing world that America is no longer the idyllic place that drew millions looking for a chance to make a new life.
Instead the "Me-generation" (or as I am growing to regard many of them, "Gen-Xcrement"), the kids who have been raised with all the benefits of their parents' labors and on the backs of those who came before them in honor and integrity, seemingly have decided that the world is their personal playpen (or as is often the case, their pig-pen). Disassociated with either social mores or personal responsibility, these young, pampered mongrels seem determined to destroy every vestige of what we oldsters (how did I get here?) used to think of as "civilization." While much of this moral descendency is an accident of omission (because each successive generation of parents is less-informed or less concerned with parenting skills), a huge portion of this societal dissonance is being deliberately invoked by sinister agents of change," including the union-dominated public school system and most of our formerly-prestigious universities.

I mentioned in a previous rant that creationist-evangelist Ken Ham had once said that it only takes one generation to raise a race of savages; meaning that without diligent teaching and reinforcment of good moral behavior, a culture will soon revert to their most primitive instincts and unrestrained lusts. I would venture to say that based on the abundant evidence, his statement is no longer merely conjecture.
Presumed authorities on child-rearing have tricked us into pouring profuse love on our children without demanding responsibility and respect in return. We then put them into the "caring hands" of a hostile, subversive and corrpt education system.   In sparing both the 'rod' and substantive education, we have unwittingly lay cast to the next generation of heathen Nazis; and I mean that in the most literal and horrifying terms.  May God save us all from our sins of omission.
Posted by Chuck Teal at 11:30 PM