Carpe diem! This is their moment. That is the perception as the wave of discontent is spreading  being sown around the world by a shallow and temporary coalition of convenience between marxist/progressives and Islamic radicals. The crest of this tsunami has occured in Europe and across North Africa, where labor unions have pushed nations to the brink of bankruptcy and into social and economic chaos. This is part of the legacy the radical Left has caused by having gradually produced a psychological and economic dependency on 'entitlements' for more than a generation.

Across North Africa and Southwest Asia Muslims are demonstrating and rioting; a "spontaneous" uprising that has been several years in planning.  In Egypt, this was largely due to the efforts of Google's head of Middle East marketing, Wael Ghonim, who exploited social media to produce the world's largest "flash mob" thus far.  In Egypt, Algiers, Libya, and Iran the people were provoked into rising up, ostensibly for 'freedom', although freedom is the farthest thing from the ultimate goal of the Caliphate the Islamists are pushing to create, at least for women and anyone considered less than radical enough.

Incidentally, upon his arrival in Cairo, Yusuf al-Qaradawi, high mucky-muck of the Muslim Brotherhood, was graciously escorted to a stage to address the adoring and jubilant crowd. Google's Ghonim, who helped orchestrate the revolt and had claimed that the Muslim Brotherhood would "not be allowed" to co-opt the revolution, and who had been set to speak, was briskly offstage with nary a word, other than a veiled warning that he was lucky to still be alive. So much for the coalition of Islam and the Left. The classic line from the fantasy movie "Highlander" comes to mind: "There can be only one."
Back home in what is rapidly being turned into the disUnited States of Amerika, those oh-so-clever Leftist radicals are trying to cash in on the global angst by applying their own particular brand of chaos-creation.

Modern American Progressivism can trace its roots to Madison, Wisconsin; and a thuggish portion of their ilk is still apparently well-represented there. Almost too amazingly, within a week of their initial demonstration the radicals had produced a coordinated plan to hold more demonstrations in every state capital on Saturday. The plan seems to be to capitalize on the emotional fervor and momentum of the North African riots, and the perceived success (since the results are yet to be determined) in Egypt. This time it is the juvenile antics of the teachers' union (the same union that has succeeded in lowering Wisconsin's literacy rate by 2/3 despite spending more tax dollars on education than any other Midwest state) that is producing the chaos, with a blatant and calculated mischaracterization of Gov. Walker's attempt to rein in public spending (through the collective bargaining process) in part by attempting to have teachers pay at least some of their gold-plated healthplan costs. 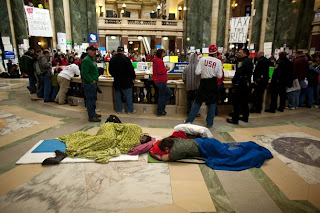 Meanwhile, the state Senate continues not legislating because all the Demoncrats fled the state rather than actually doing their job; which actually puts them in the same position as the teachers who stood in the cold (before occupying the Capitol itself) blaring their tired old hippiesque-commie chants, who are getting paid for playing hookey and lying (as though they were fooling anyone) to their administrators. Then there are the doctors, diligently plying their trade on the teachers' union picket line, conducting fraudulent "examinations" of "patients" and writing false excuses just waiting to be entered into evidence, on the chance that any actual justice might be entertained in this sick national joke.

And now, the "joke" is making the rounds as other Demoncrats adopt evasion of their duties as a tactic to replace actual debate and legislation. Demoncrats from Indiana's House also skipped town to avoid a vote on a similar proposition to save their state from bankruptcy by reining in their obviouslyout of control nions.

Just out of curiosity, how do you think it would have turned out if Republicans had been the ones to pull off this juvenile stunt? Yeah, I thought as much.

One last thing on the topic of unions. What are we to think when the President of the United States has spent two years in the White House, and has never even called most of his own Cabinet advisors, but has top union officials visiting his office several times each week? No wonder Obama doesn't seem particularly interested in our disintegrating foreign affairs; he's too busy sucking up to the unions and "community organizations" that bought his way into the White House.

Uncivil discourse.  Even if you're one of those people who ignores the news altogether, or only catches snippets of your local goings-on, you may have noticed a rapidly increasing trend across the country. In times past, Americans were generally at least somewhat courteous to one another in ordinary circumstances. You were generally taught - and expected - to use basic manners. You would say "Please" and "Thank you," and others would generally reciprocate.  What used to be termed "civil discourse" was the norm; people who disagreed in interpersonal situations could argue, perhaps, but there was generally a measure of restraint.

But after decades of public schools' failure to teach ethics (which goes back to the teachers' unions and the teaching colleges, doesn't it?), the Church often being more interested in preaching politics or the finer points of perceived theology than reinforcing basic biblical concepts of morality, the breakup of families leaving no parents qualified to instruct children (never mind providing an actual example) in civility, good manners, common courtesy, personal modesty, self control and other virtues, civilization as we used to know it is becoming as rare as the vinyl record album. Besides the total selfishness of the various demonstrators I've been pointing out, the dissolution of civil discourse has popped up in such diverse places as a Denny's, and an unwarranted attack on a news crew trying to give mourners of a murder victim a chance to air their grief. We have gone downhill as a society; from civil discourse to merely coarse.

I've noted before how it stuck in my mind, that Ken Ham, evangelist and founder of Answers in Genesis and the Creation Museum, once told an audience that any civilization is always only one generation away from becoming once again a race of savages. His meaning is clear: when values, ethics and morality are no longer taught, raw, unrestrained selfishness will fill the void. A good, long look around will show how prophetic his statement was.

﻿Wacko theory of the week?  I found a new article on the Earth's fluctuating magnetic field fascinating. It has been known for some time that the Earth's magnetic poles are slowly moving. Essentially, the magnetic North (as opposed to true, or polar, North) is moving toward Siberia at a rate of up to approximately one degree of longitude per year, depending on your location. This situation seems to be gradually picking up speed, and it costs millions of dollars each year for airlines and other organizations that rely on charts, and can also affect hikers and others who still depend on magnetic compasses for navigation (after the GPS batteries die, or it gets dropped on the rocks).

After mulling that over, I recalled the theory about cell phones causing brain cancer, and thought I'd come up with a crazy theory of my own. So...there is iron in our blood (hence the term, hemoglobin).  It is also believed that birds take advantage of this to navigate while migrating. What if...the shifting magnetic field is affecting the blood chemistry in our brains, and is at least partly behind the vast numbers of humans who are going off the deep end, committing heinous crimes, suffering from insanity, or becoming socialists?

Too far-fetched? OK, then...what's your bright idea?  Besides; at least it gives the socialists an excuse. Just tryin' to help.
Posted by Chuck Teal at 10:36 PM