It Makes My Head Spin

Have you ever tried to talk to someone who changes their mind thirty times a minute? It can be just a little frustrating because you can never really tell where they stand on an issue - and sometimes, neither do they. Now try to imagine that when you're listening to the President of the United States (POTUS).

After two years of doing everything he can to demonize capitalism, trash the US economy, and emplace an infrastructure designed to convert the nation into one big socialist hegemony, Obama suddenly makes an about-face, penning a piece in the Wall Street Journal praising the very economic miracle that he has been so intent on replacing with...what?  Some imaginary socialist warm-fuzzy ideal where everyone can have everything they need, most of what they want, and never have to face a bill (unless they pay taxes)? Don't get too wrapped up in the idealism that progressives like Obama spout, because they haven't really thought them through, as evidenced by the chaos of 'unintended consequences' that lie in the wake of virtually every policy they enact.

For example, on the heels of lavishly entertaining China's president Hu , he flew to the original home of General Electric (and, incidentally, the Age of Electricity) telling workers in a turbine-manufacturing plant, "We're goin' back to Thomas Edison's principles; we're gonna build stuff and invent stuff."

That sounds great for what amounts to an early stump speech for 2012, and perhaps encouraging to workers who have seen that jobs can no longer be taken for granted, but how does it mesh with the tangled framework of potentially business-crippling new rules that have been introduced (so far) by his army of regulatory czars. And I don't think it rings true to the hundreds of Boeing workers being laid off despite several brand-new multi-billion-dollar government contracts. And GE (the company that brought the electric light to the world) is moving the last of its last light bulb manufacturing plants from Ohio...to China. Oh, but wait; a new light-bulb plant may open in Ohio - owned by a Chinese company.  Anyone see a pattern here?

Granted, to the uninitiated Obama's article and speeches will seem swell, especially with highlights such as his talk of claiming (wait for it) "Over the past two years, the goal of my administration has been to strike the right balance." He made that statement in concert with the signing of an executive order requiring regulation to be agreeable with economic growth and to "cut red tape."  Time will tell how far that goes.

The president's new take on jobs is interesting, especially since the perception of many is that his first two years have been a disaster for this nation's economy, defense, sovereignty, ecology and sanity. During his tenure the national discourse has become, more than ever, a form of internecine warfare instead of rational debate. Between his apparently subconscious inability to stand with dignity in the presence of other leaders and his embarrassingly quick tendency to jump to conclusions without knowing the facts, this president has suceeded in keeping the entire country unified in one condition: unbalanced.

Seeds of discontent.  There are many Americans who are blissfully unaware of how huge agricorporations have been spending hundreds of millions of dollars over the years developing new strains of fruits, vegetables, grains, and to some extent, animals that find their way onto our dinner tables and into our lunchboxes. The objective has been to develop foods that are more disease-resistant, hardier (to grow in more adverse climates), more productive, insect-resistant (in the case of plants), and of course, huge money-makers. Unfortunately, when that last point comes into play (usually first, middle and last place), the other points tend to take a back seat. And in some case, waayyy back.

For instance, an outside study of transgenic corn developed by megacorp Monsanto reveals evidence of toxicity that contradicts the manufacturer's claims, and which may put a large portion of the food chain at risk.  Apparently, the corn includes a self-produced insecticide that may lead to kidney impairment, weight gain (particularly in females), and may be linked to the massive deaths of entire colonies of honeybees, which are absolutely essential for the pollination of many food crops.

Another controversy Monsanto is involved in is the so-called 'terminator' seed technology, in which hybrid seeds for commercial crops are specifically designed to produce higher yields, but are also sterile, meaning that new seeds must be purchased from the manufacturer for each season's crop. The perceived danger is that those hybrid seeds may eventually contaminate and damage the viability of natural, native crops, which would in turn wreak destruction on the food supply - especially if the supply train for the hybrids was somehow impaired (say through natural disaster, terrorism or other calamity). In a worst-case scenario, that could mean slow death by starvation for potentially billions of people worldwide.

Another school of thought.  Do you know anyone planning to shell out big bucks to send their kids to college? They might have second thoughts to learn that according to at least one study 45% of students aren't learning anything by the end of their sophomore year, and as many as 36% showed little improvement after four years of college. 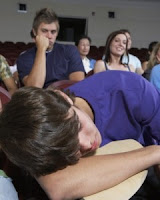 In a recent article detailing the work of two graduates who actually did learn something in college, we learn that they have published their findings in a book titled, "Academically Adrift: Limited Learning on College Campuses." In it, the authors note that half of students never took a course where they had to write as few as 20 pages during an entire semester, and a third didn't have so much as 40 pages of required reading. One freshman said that most of her first year at college was more of a review of her senior year in high school. Others claim that universities were more likely to produce professional partiers instead of refined intellects. Not exactly pushing the envelope of personal development.

The article notes with a hint of irony that the report comes as the federal government argues for more college graduates in order to remain globally comptetitive. One of the authors, Richard Arum of NYU, responds to that by stating, "It's not the case that giving out more credentials is going to make the U.S. more economically competitive. It requires academic rigor ... You can't just get it through osmosis at these institutions."

That's an interesting insight, considering many colleges themselves have worked hard to de-educate Americans over the past several decades, with increasingly lax standards and an emphasis on progressive indoctrination instead of intellectual rigor.  Apart from the technical institutions (MIT, RPI, etc.) which generally continue to produce many exemplary graduates (unfortunately, many of them foreign exchange students who take their knowledge and potential home with them), most colleges now seem to pander to people looking for a free ride to the nearest party. Hard work and long-term dedication are replaced with sports scholarships or Daddy's checkbook; engaging and demanding curricula are replaced with meaningless liberal-arts and socialist revolution-oriented 'political science' courses designed to radicalize their worldview instead of expanding their reasoning ability, and a collegiate social experience more akin to tribal enclaves of Dark Age barbarians instead of the hallowed institutions of higher learning (two words that are virtual antonyms in many modern colleges) which produced so many truly enlightened and productive minds.

The gist of this is, if you're planning to bankroll your child's future with college tuition, keep in mind that unless you've raised a son or daughter with a high degree of focus and toleration for hard work, you should be prepared for a substantial loss in your investment. And your man/woman-child should prepare for a life much less accomplished than they may be imagining, because the 'best things in life' seldom make a magical appearance.
Posted by Chuck Teal at 12:17 AM