Most of those brave and/or curious few who bother to read this tacky little blog already see the tragedy that is unfurling daily in what now has become plain sight. We - the people who appreciate our heritage, love liberty, are willing to put up with people who disagree with us, who understand the value of virtues (even if we fall a little short on them ourselves), respect God, and generally foot the bill for the thieves, parasites and malcontents among us - are under assault on every front: economically, militarily, politically, culturally, legally, socially. Here are some glimpses of the latest hijacks...er...hijinks.

The Left is in full-court press against the US Constitution, our economy, and the American people. That guy in the White House is slamming us with everything from a brownie ban to a ban on offshore drilling for US companies while China, Cuba, and other hostile nations freely poke holes off our shores, surely smirking as they drain the oil (and the future) out of our own backyard. Despite his campaign rhetoric (the only thing the Left actually does well, if not truthfully) of transparency and jobs creation, he has quietly filled every bureaucracy (and has created dozens more) with proudly socialist/progressive czars and lackeys, and has overseen fiscal malfeasance that has pushed unemployment to 9.8%.

The Lame Duck session of Congress is winding down, pushing out as much legalized corruption as possible before the clock runs out on their merry mayhem. In between defeating a ban on earmarks, trying to control the food supply and limiting the volume on TV commercials (something I could actually agree with them on if it didn't open the door to more control), in one of many measures to stifle actual debate our lawmakers dazzled their employers (us) with inane "stall talk" that has no bearing whatsoever on their official function. But then again, if they just stuck with that sort of inane floor speech instead of the destructive legislation they are so famous for, wouldn't we all be better off? 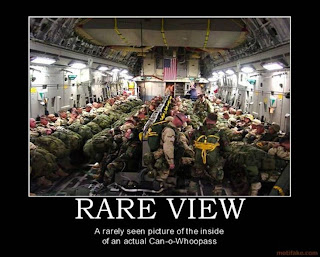 Don't bother to ask; I'll just tell you.  If the recent episode where Commander-in-Chief Obama inadvertently(?) disrespected Medal of Honor recipient SSgt. Salvatore Giunta wasn't enough of a slap at those who go into harm's way on our behalf, his directorate in the Department of Defense just chose to lower our defenses a bit further by using a new "study" that indicates more than half of the US military is in favor of open homosexuality in the ranks to push for repeal of the "Don't ask, don't tell" policy. Never mind that pesky little stat that says the combat 'grunts' - especially Marines-don't like the prospect of the guy next to them in the foxhole (gives it a whole new meaning, doesn't it?) trying for a little "action" of a different sort during a lull in the combat. As in most human activities, perception counts for a lot; and as expected, most of those in the military poll who supported open homosexuality are the guys and gals in the rear (no pun intended...really) with the gear.

SecDef Robert Gates and JCoS Admiral Mike Mullen did what Cabinet officials are supposed to do; they essentially told the military to suck it up (OK; that one was intentional) and follow orders blindly.

Incidentally, during an uplifting speech to the troops during his surprise visit to Afghanistan, Obama apparently forgot the Coast Guard is part of the military he commands so well. Who writes this guy's speeches, anyway?
Mine your own business.  As long as we're on the subject of national defense, how much sense does it make for the US to allow a State-controlled Russian firm to buy the mineral rights to two Wyoming uranium mines? The NRC has tentatively approved licenses for one existing and one proposed mine, which are already owned by a Canadian firm. Is there anyone else besides me that sees anything wrong with this picture? Thankfully, yes; there are a handful of congress-folks who are eyeing this situation carefully. But in light of the fact that the Russians have provided nuclear material to Iran, and Putin recently gave the US a not-so-veiled warning to "[not] interfere with the sovereign choice of the Russian people," this has troubling potential. The current permit prohibits export of nuclear fuel, but it isn't as though the Russians have ever let the rules of other nations stand in their way.

Art crass.  The vaunted Smithsonian Institution has since its creation been sort of a protector of American history, heritage, accomplishment and culture. Alas, it has also been co-opted by the Left in an attempt to hide, minimize, and marginalize Americans and give them the impression that, rather being than the greatest nation in history, America is only a thugocracy (true, at least whenever Democrats have been in charge) that rapes the rest of the world and keeps them in perpetual misery. The latest attack was via an "art" exhibit that sensationalizes sexuality - not the normal kind, of course. As though to insure it offended the most people, part of the exhibit was a video that depicts a crucifix covered with blood and ants. I have no idea what the connection to the theme was supposed to be, but the righteous outrage (did I mention it was presented over the Christmas holidays?) of a couple of sensible congressmen finally convinced the amoral cretin in charge - with not-so-veiled threats to "look" at their funding - to pull that particularly egregious part of a totally degenerate exhibit, thereby proving that even a total ass can do the right thing, at least under duress.

'Net results.  Despite opposition from Congress and the lack of any specific power in its charter, FCC Chairman Julius (Caesar) Genachowski has grasped at power not rightfully his by firing the opening shot against those in the blogosphere who oppose the "higher powers" with the execution (?) of Net Neutrality, a lame excess to impose new rules on internet providers - and therefore, on internet users.
Posted by Chuck Teal at 12:17 AM