"...that try mens' souls." Those were the opening words in the first of a series of pamphlets titled The Crisis by Thomas Paine in 1776.  This initial essay was deemed so inspiring at the time that General George Washington ordered its reading to the troops during that terrible first winter at Valley Forge. It not only spurred his troops to look beyond their suffering and stay the course, it was instrumental in stoking the colonists' fervor for freedom, even in the face of the greatest military power of that age.

It continues: "...The summer soldier and the sunshine patriot will, in this crisis, shrink from the service of their country; but he that stands by it now, deserves the love and thanks of man and woman. Tyranny, like hell, is not easily conquered; yet we have this consolation with us, that the harder the conflict, the more glorious the triumph. What we obtain too cheap, we esteem too lightly: it is dearness only that gives every thing its value. Heaven knows how to put a proper price upon its goods; and it would be strange indeed if so celestial an article as FREEDOM should not be highly rated. Britain, with an army to enforce her tyranny, has declared that she has a right (not only to TAX) but "to BIND us in ALL CASES WHATSOEVER" and if being bound in that manner, is not slavery, then is there not such a thing as slavery upon earth. Even the expression is impious; for so unlimited a power can belong only to God." 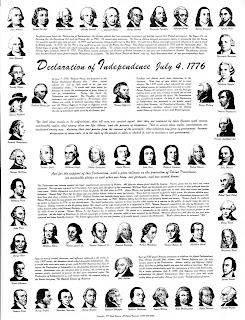 We desperately need that same sort of patriotic fervor now. Paine's words should still reach our souls today. Too many Americans today don't even rise to the level of "sunshine patriot;" they are content - or oblivious - to the chains we have allowed to be forged around our necks. We still "esteem too lightly" those things we don't have to fight for.

During the course of my "normal" life and work I speak with a lot of people, and I am not nearly so dumbfounded by the lack of awareness in most people as I am of the lack of interest in what is happening around us.  Americans, in the simplest terms, have become the euphemistic "frogs in the pot of hot water." The pot is now simmering, and frankly, there is no longer any safe place to retreat to in a world growing darker and more oppressive by the day.

We have lived our lives bathed in the hard-won freedoms of mutitudes of those who have gone before us and those who fight for us even now (we can discuss the politics of war another time; the fact is that most troops are fighting for their buddies and home-and-hearth, not policies).  Yet most of us seem as oblivious to that debt we owe to them as we do to the dangers to our freedoms and way of life.

America is no longer the great nation we grew up in. Despite our numerous flaws (after all, it is a creation of flawed humans), this was the go-to nation; the place that drew the cast-offs, the downtrodden, the idealists, the dumb, the brilliant, and the dedicated.  All those people who came before are where we came from, and they built this dream nation.  In our selfishness, ignorance, arrogance and laziness, we've given it all away to an ideology built on destruction, desolation, and destitution. Unless we wake up quickly and work together to stop it, we may never get back that dream we're losing.

Email ThisBlogThis!Share to TwitterShare to FacebookShare to Pinterest
Labels: The Crisis, Thomas Paine