In case you haven't noticed, tyranny is no longer something that only happens to other nations, nor is it merely an unpleasant aspect of history. Tyranny in various forms and stages has plagued mankind throughout history.  It surrounds us even today, and on a global scale has been the aim of Progressives (also known as liberals, socialists, Marxists, communists, ad nauseum) for a long time. It has been creeping up on our own shores for more than a century.  For all our imperfections, America has at least presented the illusion, if not the fact, of being a shelter from that storm.

Now, America has been brought to the tipping point, where the most aggressive Progressives believe this is their moment; the prime opportunity to seize power and destroy that pesky freedom thing we Americans seem so attached to.  Too many of us have no real idea of what's at risk here.  We are told again and again that this or that is a right, but we are no longer taught what rights really are (clearly spelled out here by News legal analyst and former Judge Andrew Napolitano), and that ignorance leaves the door open for all sorts of evil.

One of the things Progressives conveniently ignore is the essential role of God in American liberty and throughout our national history, and most Americans have forgotten - or have never been taught - how essential God is to our cherished and undervalued way of life.  This animosity toward the foundational faith of America includes slams such as atheist public school teachers humiliating young students for their Christian faith and college professors comparing the Christian cross to the swastika.

But just as egregious as ignoring God, the progressives are now actively changing our history (please watch this segment) even as we live through it. The ways in which they do it can be subtle; not just through what passes for news, but also which news items they don't report.  The effect they seek is - as Obama told us a few days before the election - "fundamentally transforming America." They are rapidly turning this  country into their long-awaited socialist a Utopia (literally: "no place") that will be a living nightmare for all but the most influencial.

There are only two things standing in the way of this Marxist juggernaut.  One has been Americans who still believe in the American dream; people like the 9.12 Project, the Tea Party movement and other conservative grass-roots groups and gatherings.  But those people are being maligned, belittled, ignored and occasionally, physically attacked by the Left's radicals.  The Left has no intention of going away peaceably; their course of last resort has always been extremism and violence.  They, like their spiritual brothers the radical Islamists, are bullies by nature; if they can't convince you, they'll force you to follow them, or they will try to destroy you.  And any clear look at the wake of both those philosophies will show that hopelessness, depression, enslavement and poverty result.

The second thing that may stand in the way of the Left's fulfillment of their dream to take over America is...Barack Hussein Obama. There is a growing disillusionment with the pace of the formerly Annointed One's putsch by the less-patient fanatics on the Left.  His speech in Copenhagen was disappointing to those who were expecting to get their undeserved share of what's left of America's wealth.  His fiscal policies (the "inheritance" from Bush is past; he owns it now) are utter failures as they drive the economy deeper into the dirt, and Americans into debt.  The poorly-named stimulus of 2009 also bombed, with every state except North Dakota and Washington, DC showing a net loss of jobs (and even those two fell far short of government expectations - it was supposed to produce jobs).

Not so funny then, less funny now.  For years, long-ago Saturday Night Live star and current Minnesoa Senator, Al Franken, has demonstrated that what little sense of humor he has is geared more toward sarcasm and insult rather than levity.  Since the dubious court decision that ended an election tie with Norm Coleman, Franken has shown himself to be more Frankenstein than funnyman, as he uses his senatorial privilege and committee memberships to insult, confront and annoy both Republicans and those on his own side of the aisle who don't show proper party unity. He has revealed himself to be even more petty, hateful, disrespectful and hyper-partisan than we thought.

Mosque, or mocks? America is a country wherein by default, virtually any religion will be allowed to exercise itself. Unfortunately, this graciousness (some might say, short-sighted foolishness) extends itself even to religions that have shown themselves to be hostile to America and our traditional values. Now, as a slap in the face to the respect we offer, a new five-story mosque is being constructed just two blocks from the World Trade Center site. 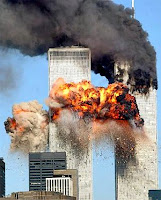 The building, which formerly housed the Burlington Coat Factory, was abandoned after it was damaged by a falling landing gear assembly from one of the ill-fated aircraft used in the attack that killed nearly 3,000 people.  The the American Society for Muslim Advancement (ASMA), which took over the building, plans to develop it into a major Islamic cultural center.  Curiously, a permit was granted even though city inspectors were unable to gain access to inspect the building, despite several reports of illegal construction and blocked exits. What are they hiding? Who else in New York City could get away with such slipperyness, especially in light of such a high-profile development?

I wonder; will it be the same sort of 'cultural center' where the terrorists who hijacked those planes were trained?  Will the worshippers be able to look out at that still-undeveloped hole in the ground as they face Mecca during prayer?  Are they connected with the Black Muslim communities throughout the US, including Hancock, NY (aka, "Islamburg), where members practice paramilitary and guerilla tactics.  Frankly, I'm not so concerned about the training as I am about their philosophy for using it.